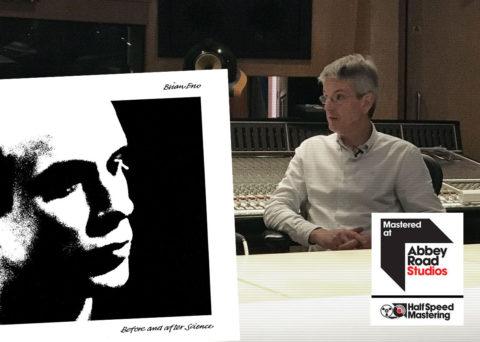 In the event, hosted by Uncut’s associate editor Michael Bonner, Miles Showell started off by giving an in-depth description of how the half speed mastering system works:

“It’s quite simple, if you think of the music from speakers, the soundwaves, it’s recorded on an LP as a wavy groove. So the size and shape of the groove is directly correspondent to what the music is doing at that point. So let’s say, for example, we have some bass… you have a very slow lateral movement of groove. It goes a long way, but it travels quite slowly. Mid-range would be a guitar or a snare drum, or some vocal. Much, much faster… but still not too fast. High frequency information, like a tambourine or a high-hat – or anything that’s high end – moves really fast. So let’s say with a tambourine, you might have a 12kHz component in there. That’s 12,000 air cycles a second. The only way you can cut that into a record is to have the recording stylus vibrate at 12,000 times a second, otherwise if it didn’t do that, it wouldn’t get it on the disc and you couldn’t play it back – it wouldn’t be there! That’s actually quite difficult… to persuade this tiny chisel [to cut] into a disc, and it’s buzzing around – it gets really hot and quite stressed. So if you can slow the whole thing down, and reduce the music by a factor of two and the speed of the cutting lathe that’s cutting the disc, all of that difficult-to-cut high-frequency information becomes mid-range – much easier to get on! The system’s not getting pushed to its limits, it’s not getting stressed. Everything has got twice as long to record that intricate groove.

The system has an amplifier, 600 watts-per-channel, which feeds two little coils of wire, like headphone coils, that vibrate and they move the stylus that records into the master disc, and that’s how records are cut – that’s how it works. The amplifiers that are feeding the cutter head – usually at half-speed the cutter head will draw about a quarter to a third of the current it needs for doing the same thing in real time, so it’s just far easier. It’s certainly the most accurate way to get a recording onto a disc.” 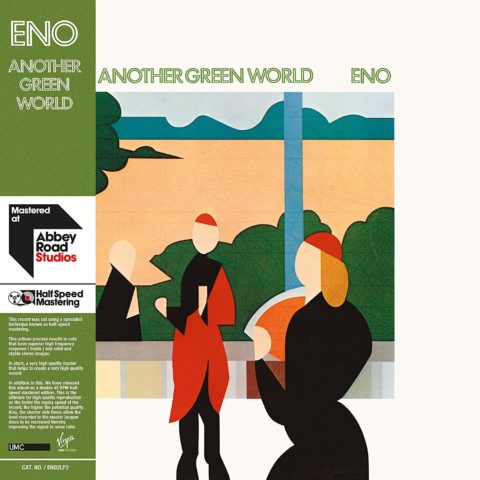 Talking about the Brian Eno albums specifically, Miles explained the process with regards to the master tapes:

“We sourced the best tapes that were around. I have a very good machine upstairs, and like [the fact that] there are no new cutting lathes, there are no ‘new’ tape machines, really, anymore. Certainly in the professional world. I have a machine from the late seventies, made by the Ampex company – a great sounding machine. I have custom heads that I bought for it and I capture a high resolution digital file. Very, very high resolution, through very good analogue-to-digital convertors and it will go into a workstation and I’ll fix any errors with the audio… I mean quite often, you have old tapes and they’re starting to fall to pieces…that’s the problem with this stuff. It’s a mechanical thing. You’re running a tape through a machine and each time you play it you’re wearing bits of it away. So it’s actually not good practise to continually play these old tapes. Fortunately by re-capturing them digitally you can get in under the radar and repair some of these problems. You can take out hums that have got introduced or clicks. If somebody has a tape machine and the heads haven’t been de-magnetised correctly, it will put a load of clicks all over the tape and in fact, one of the tracks on one of these [Eno] albums had that problem. So I had to go through forensically and every couple of seconds – ‘aah, there’s a click’ – and remove it. There’s no other way you could do that, by just playing a tape. So I always prefer to capture, very high resolution digital. I’ll do a vinyl specific transfer, so I’ll be capturing it to the workstation as if I was cutting it. No massive compression, to reduce the dynamic range, no crazy limiting which is what you put on a CD to make a CD sound loud. So I do a transfer which is clean, fix any problems and run that at half-speed into the cutting lathe, which is one I’ve had restored. In fact these Eno albums were one of the first sessions I did with it.”

We spent an hour or so listening to various tracks from the Brian Eno remasters (they sounded great) and afterwards I put a few questions to Miles on the process:

SDE: You said at the beginning that you took the tapes into the digital domain which allowed you to do some fixes and repair things. Would you still do that if the tapes were in really good condition, because there is this school of thought that advocates an all-analogue workflow…

Miles Showell: The tape machine I use is an Ampex machine. They never made a machine with an advanced head and I’ll try and keep it as basic as I can on that… but when you’re cutting a record, obviously, the grooves are all this shape (does a narrow ‘v’ shape) and then if you get a big bit of bass, you get a massive bit of expansion, laterally. Often with albums you’re trying to squeeze everything as close as you can, because you’ve got a lot of music to pack in. So the lathe has a half revolution warning of what’s coming up. So it thinks ‘I’ve just cut this shape and I’m about to cut this massive bit of bass… so I need to allow for it’. Normally you would use a Studer tape machine and they’re pretty good… they have a big loop and the thing plays twice. The first head feeds to the computer in the lathe and the second head feeds the cutter head. Ampex, even in 1978, never made a machine with the loop…then their tape machines came with a digital delay… but the sound of the Ampex machine is so much more superior than a Studer, that when I’m capturing it hi-res digital, it still, to my ears would knock a Studer machine dead, even going all analogue. Plus, some of these tapes are Dolby A noise reduction. There are about 20 half-speed Dolby A cards in the entire world, none of which I have and the Dolby company aren’t forthcoming about what they did to modify the card to decode Dolby because that’s there secret knowledge and they don’t care about that anymore and that’s all history. Yeah… I understand what people say about going all analogue…and I definitely have a problem cutting from shoddy CD masters, but if you do a very nice clean capture, extremely high resolution with very good convertors all locked down with really stable word clocks, I don’t think, personally, there’s much to be lost there. I think the gains you’ll get from the tape machine are far greater than any losses you’ll have by going via high resolution digital. You’ve got to imagine that every roller, every bearing in a tape machine has an effect on the quality of the sound that comes out. Now on a Studer all-analogue machine you’ve got probably 15 wheels it has to go round, before it gets played. If any one of them has a slight problem, it will have an effect down the line… There’s digital and digital, basically. You can have shoddy digital and that’s not great to cut from and I’d never do a half-speed album from an over compressed, limited CD master. What’s the point? It’s going to sound crap. If you give me rubbish to work with, I can’t produce a good cut. If I’ve got a good source and I do a nice capture, digitally, high resolution, it’s incredible. It will sound great.

SDE: How can you tell if something isn’t right, though? If you are listening to the cutting at half-speed then you have no idea if there are problems?

MS: We insist that for every half-speed session, the client has an acetate, which I will check realtime, either here [Abbey Road] or at home. Then it goes off to the client. If they are happy and everyone’s happy, then I’ll cut the masters, because you’re right, you’ve got no idea what the cutter head is doing, because everything is slowed down so much. The funniest things are the live albums because all the ‘whoops’ at half speed sound like booing… as if no one is enjoying the gig! Yep, it’s no fun to work on in the studio, but then when you play it back, you think, ‘wow’. When you think what we’re listening to… there’s a diamond in this cartridge here, that’s vibrating in a piece of plastic and it’s making a very, very low-level noise which we’re amplifying. And that’s it! Don’t think records are hi-tech. The system was invented in 1887.

SDE: Do you think 45RPM pressings changes the nature of the album, because instead of sitting there for 20 minutes and flipping the record over, you’re now listening in bite-sized chunks?

MS: If you’re going to dedicate 45 minutes of your time to an album, to half little ten second breaks… is that a major problem? There certainly is a trend for double albums at 45RPM. Yeah.. it’s a faff to get out of your chair, but it sounds so much better.

The four Brian Eno half speed mastered albums are out now. Each gatefold package comes with OBI strip, download voucher and ‘Abbey Road Half Speed Master’ certificate. Note below that these are well-priced via Amazon Germany.

Before And After Science [VINYL]

Side 1:
1 Needles In The Camel’s Eye
2 The Paw Paw Negro Blowtorch
3 Baby’s On Fire

Side 2:
1 Cindy Tells Me
2 Driving Me Backwards

Side 3:
1 On Some Far Away Beach
2 Blank Frank
3 Dead Finks Don’t Talk

1. Burning Airlines Give You So Much More
2. Back in Judy’s Jungle
3. The Fat Lady of Limbourg
4. Mother Whale Eyeless
5. The Great Pretender
6 Third Uncle
7. Put a Straw Under Baby
8. The True Wheel
9. China My China
10. Taking Tiger Mountain

Side 2:
1 The Big Ship
2 I’ll Come Running (To Tie Your Shoes)
3 Another Green World

Side 4:
1 Zawinul / Lava
2 Everything Merges With The Night
3 Spirits Drifting

Before And After Science

Side 1:
1 No One Receiving
2 Backwater

Side 4:
1 By This River
2 Through Hollow Lands (for Harold Budd)
3 Spider And I