We got great feedback on last month’s ‘Second Hand News’ feature (thank you!). For newcomers, this is where we give you a little insight into the ‘new arrivals’ into the SuperDeluxeEdition used record collection. Basically, an excuse to talk about some good records or CDs.

So here, for your pleasure, is the next instalment: a few items that have found themselves into those inadequate ‘recycled’ plastic bags that charity or thrift stores often keep behind the tills. Lots of vinyl picked up in the last few weeks… enjoy!

Back to the days when every Depeche Mode single seemed like a ‘classic’. I Feel You was the lead 45 from the Songs of Faith and Devotion album. The insistent driving guitar line still sounds essential today, and the track is dripping in sweat, danger and infidelity. Included is the Martin Gore-sung One Caress. This quality B-side is an exercise in pain and guilt, with a cinematic Bernard Herrmann-esque string break thrown in for good measure. Also contains the ‘throb mix’ of I Feel You (good) and the ‘babylon mix’ (not so good). Depeche Mode’s new album Delta Machine is out now. 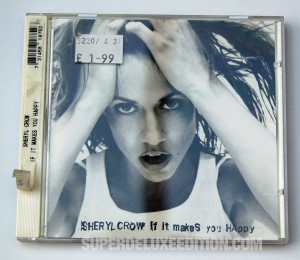 The four track US CD single of one of Sheryl Crow‘s very best songs, comes in a album-style jewel case with white tray. The selection here features two tracks not found on either of the two UK CD singles: I’m Gonna Be A Wheel Someday (from Fast Track To Nowhere, the soundtrack to a forgotten US TV Series called Rebel Highway) and No One Said It Would Be Easy live in Nashville. The former is dire, with the later simple coming across as rather lacklustre. Thankfully, the cover of the Derek and the Dominoes song, Keep On Growing, is excellent. The previous owner had left bits of the ‘J Card’ stuck on the front. 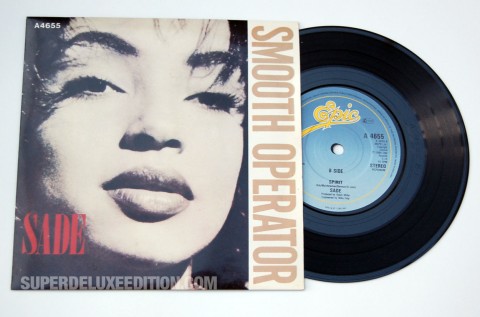 Amazingly Smooth Operator was left as the fourth and final single pulled from Sade‘s Diamond Life debut back in 1984, but would be the breakthrough track for the band in America where it reached number five on the Billboard Hot 100. This found its way into the SuperDeluxeEdition shopping basket because it is in excellent condition, (sleeve and vinyl) and for non-album B-Side Spirit, which we hadn’t heard. Spirit is not the hidden treasure we were hoping for, but a perfectly decent slice of early eighties mid-paced funk-jazz. The Smooth Operator here is shorn of its spoken word intro as featured on the album version of the song. 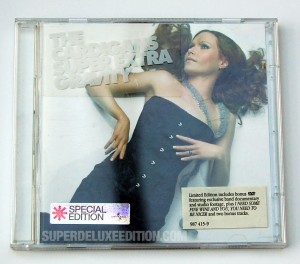 The first rule when you see the last Cardigans album, Super Extra Gravity, secondhand is check you are not looking at the rare-as-hen’s-teeth SACD version. In all likelihood you won’t be (it’s very hard to find) so once you’ve got over that disappointment, the next best CD edition is this limited edition CD+DVD set. In truth, it’s not actually that hard to get hold of, and comes with two bonus tracks (Give Me Your Eyes and Slow) and an excellent DVD which is quite a thoughtful and substantive look at the making of the album – very different from some of the content-light DVDs that come with some deluxe editions. An ex-Cardigans fan had also donated the I Need Some Fine Wine And You, You Need To Be Nicer CD single to the same charity shop. So for 50p we picked that up as well (it includes For The Boys a US-only bonus track on previous album, Long Gone Before Daylight) 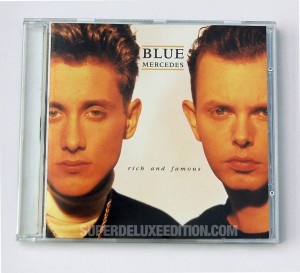 Remembered (or not) for single I Want To Be Your Property and a lead singer who sounded like ABC’s Martin Fry, Rich and Famous was the only album from UK pop/dance act Blue Mercedes. This Phil Harding and Ian Curnow-produced album was released on CD via MCA records and contained four bonus remixes including the “Def B4 Dishonour USA Mix” of I Want To Be Your Property (which also ended up on Phil Harding’s Club Mixes Of The 80s compilation from 2011). To be filed in the section marked ‘CDs we will virtually never play, but still want to own all the same’. 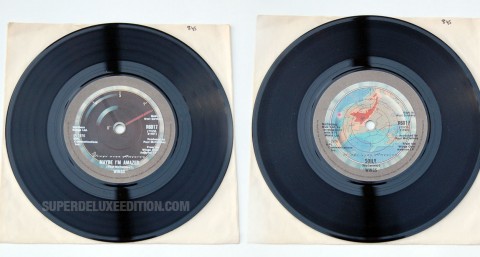 Someone had off-loaded quite a big pile of Paul McCartney vinyl where this was purchased, so it was bought at the same time as Pipes Of Peace/So Bad, Band On The Run/Zoo Gang and Hi Hi Hi/C Moon (all seven-inch, of course). Maybe I’m Amazed gets the nod for this selection due to its topicality, being of course from the soon-to-be-reissued Wings Over America album (see here for details). The studio version would have been a sure-fire number one back in 1970, but after seven years of non-stop hits with The Beatles, McCartney wasn’t bothered at that time and nothing from his solo debut was issued as a single. This live version hit number 10 in the US and 28 in the UK when it was released (in early 1977). The labels on the seven-inch share the same Hipgnosis design as the album, and B-side is Soily, normally the concert-closer in 1976 and a McCartney rarity, in that it has never been commercially issued as a studio recording. A Record Store Day 12″ of this track is being issued in a few weeks. 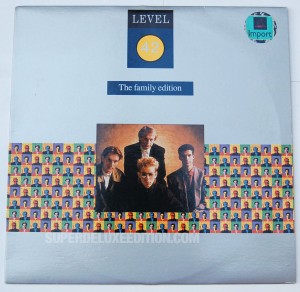 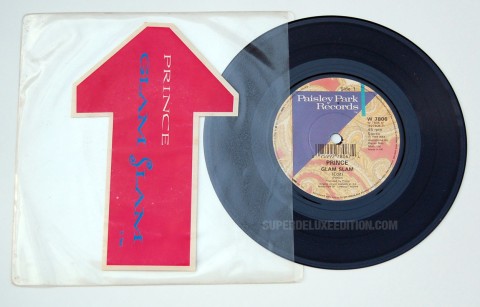 The second single off Prince‘s Lovesexy album from 1988, this UK seven-inch contains the edit version of Glam Slam on the A-Side and comes backed with an edit of Escape. The transparent sleeve with sticker contains the trend started with previous single Alphabet St. 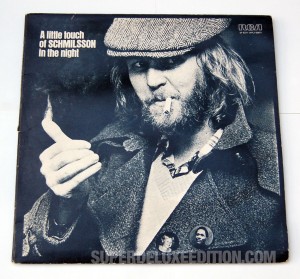 Nilsson / A Little Touch Of Schmilsson In The Night LP (1973)

The sleeve is rather warped  but the vinyl is in superb condition, so this original Nilsson UK pressing for £1 was always going to get snapped up. This collection of standards was produced by Apple’s Derek Taylor and our purchase came with the original inner sleeve which has the message “If you enjoyed the album please buy Derek Taylor’s new book ‘As Time Goes By’…”. 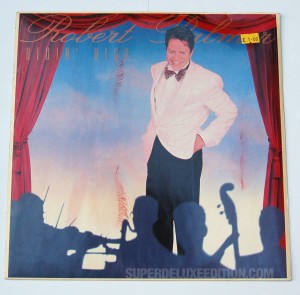 Any vinyl LP issued around 1992 or ’93 tended to be pressed in very small quantities, with the format being regarded as on its way out, which is why quite a few albums of this period (Kate Bush’s The Red Shoes, Roger Waters’ Amused To Death) command high prices on the used market. Robert Palmer‘s Big Band album Ridin’ High may not be in similar demand, but it has long been a SuperDeluxeEdition favourite and was recently reissued by Edsel Records. Thanks to the large format LP sleeve you do find yourself spotting artwork elements that had gone unnoticed previously, such as the red eyelashes and lips superimposed on the ‘sky’ background. Having said that, compared to vinyl releases of today this is a rather shoddy affair, the photo of Palmer lacks sharpness and clarity, and the vinyl is very thin, with a dull label design.