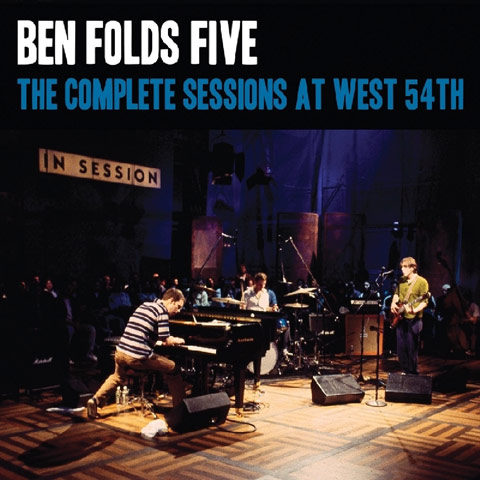 This July, Real Gone Music will issue The Complete Sessions at West 54th a live performance by Ben Folds Five as recorded by American public broadcaster PBS in 1997.

These sessions were recorded at the Sony Music Studios in West 54th Street in Manhattan and the TV broadcasts were normally very edited (around 30 minutes in length). Ben Folds Five (Folds, drummer Darren Jessee and bassist Robert Sledge) were one of the first acts to perform, in June of ’97 although the performance wasn’t broadcast until November of that same year (alongside Beck).

The video for these complete sessions have been issued on DVD (back in 2001) but not the audio, which features 15 tunes including three from the self-titled debut and nine from their then-current release Whatever and Ever Amen, and three songs that had not been released at the time (Emaline, Theme from ‘Dr. Pyser,” and the cover of The Flaming Lips‘ She Don’t Use Jelly).

This release is available as a gatefold 2LP set pressed on blue vinyl. This is limited to 1000 copies. A CD version is also being release. Both have sleeve notes by Bill Kopps.