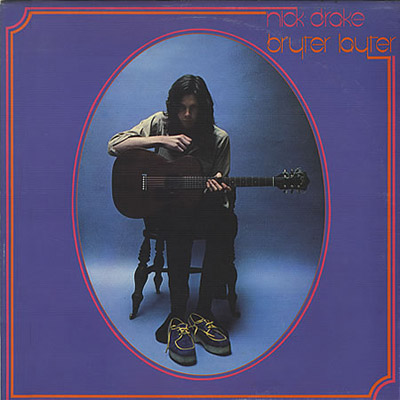 Nick Drake‘s second album Bryter Layter (1970) is to be released in remastered vinyl form as a limited edition deluxe box set on 25 March 2013.

The album will be getting the same treatment as the Pink Moon reissue from last year – pressed on audiophile heavyweight virgin vinyl, with the original packaging replicated, and additional items (such as handwritten lyrics) collected in a large clamshell-style box showing details such as the original master tape box from which the vinyl was mastered.

Like Pink Moon, expect this set to come with a card with a code for a 24-bit download. The album should be available in three different file formats – hi-res FLAC files or standard MP3s, and a ‘dubbed from disc’ set of MP3s from an original vinyl copy of the record. Some folks were lucky enough to get all three albums in digital form last year with their Pink Moon purchase. That was an error.

No US pre-order currently available, but the UK price of £32 is considerably cheaper than Pink Moon was available, when first announced. Five Leaves Left is expected later this year in the same format.