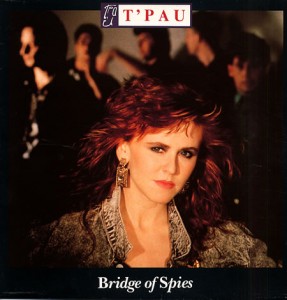 A 25th Anniversary Edition of  T’Pau‘s 1987 debut Bridge Of Spies is in the planning, we can reveal.

This morning, via twitter, she posted “Off into The Smoke for record co meeting about #Tpau25 the anniversary edition of Bridge Of Spies”

We can probably expect at least a remastered 2CD deluxe reissue featuring B-sides and remixes, with the outside chance of something more than that (e.g. a 2CD+DVD set).

The album spent a week at number one in the charts in November 1987, and spawned five UK hit singles including the number one China In Your Hand. The reissue may come out in September, which would be exactly 25 years since the original release.

Other 25th Anniversary Editions released this year have included Paul Simon’s Graceland (out now), Swing Out Sister’s It’s Better To Travel (due 18 July) and Michael Jackson’s Bad (due 17 September).