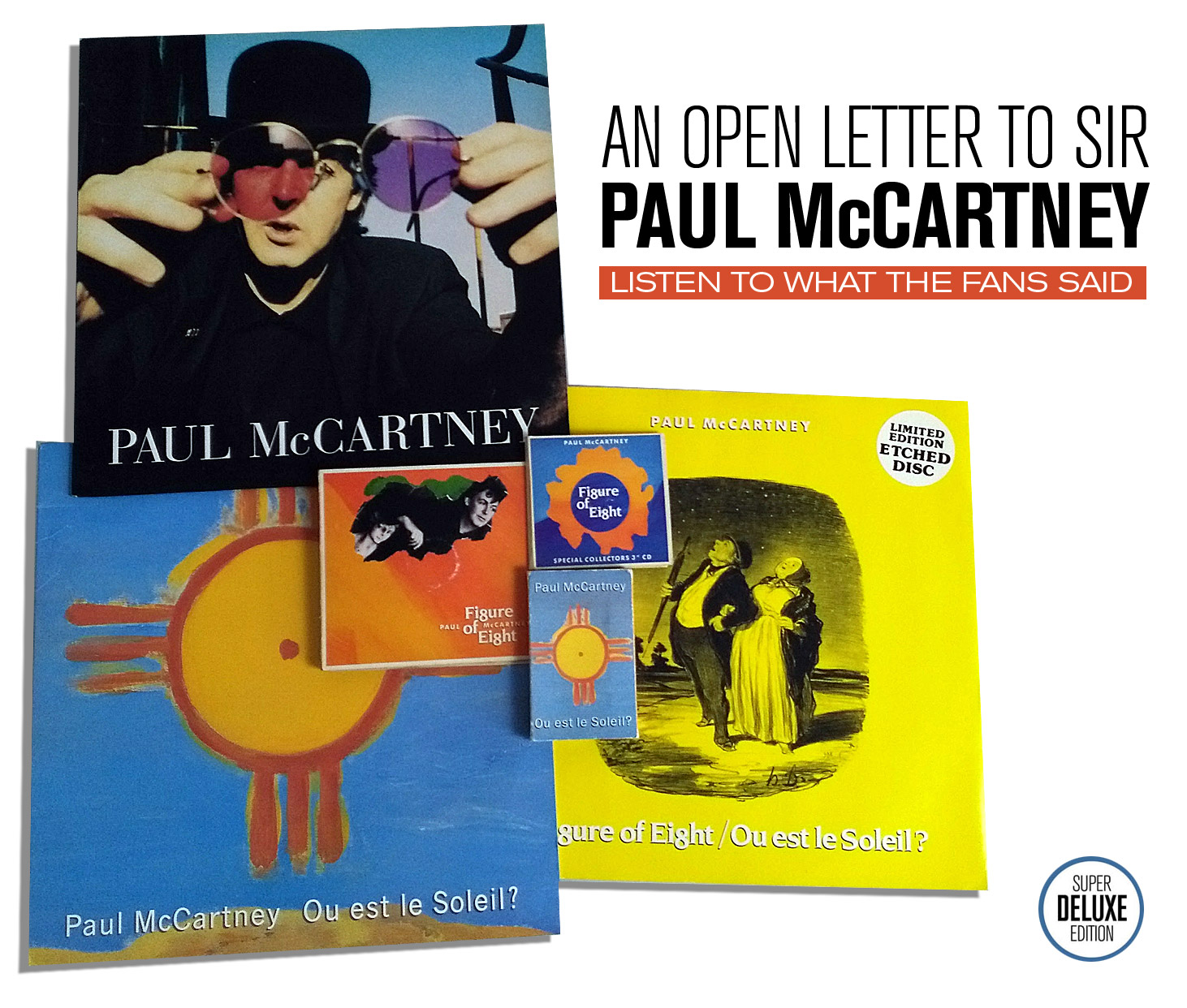 McCartney should listen to fan feedback and change the Flowers in the Dirt deluxe edition, argues SDE Editor, Paul Sinclair…

RE: Flowers in the Dirt deluxe: Download-only files.

You don’t know me, but let me start by saying that I’m a big fan of your work. I grew up in the 1970s listening to The Beatles and Wings from my parents’ record collection and once a teenager, started buying your solo albums in the 1980s. I’ve been buying them ever since. I’m an enthusiast and collector. For example, I remember buying the 12-inch of Ou Est Le Soleil? when travelling in America in 1990 (very exciting, because it wasn’t issued in the UK), and ended up having to cart it around with me on a Greyhound bus for weeks! I also picked up all three UK 12-inch versions of Figure Of Eight as well as both CD singles (three-inch and five-inch)… I think you get the idea.

So that was me. These days, I’m editor of a popular reissue and box set music blog – SuperDeluxeEdition.com. SDE (as regular visitors call it) provides news and reviews about music box sets and reissues and offers a place for fans to discuss the pros and cons of the latest releases. It has been running for almost six years and I like to think we’re influential. The blog is certainly well-read. One and a half million people have stopped by to read SuperDeluxeEdition in 2016.

I’ll get to the point… those singles I mentioned are both from Flowers in the Dirt, of course, and I had been looking forward to the official ‘archive collection’ reissue announcement since you indicated it was ‘coming soon’ in last year’s Tug Of War and Pipes Of Peace reissues. I expected we’d get the usual mix of album, plus demos and period B-sides and remixes. You’ve delivered this, but for some reason, you have treated the B-sides, remixes and single edits differently to the rest of the audio. The album and the McCartney/MacManus demos get to travel ‘Club Class’ and enjoy the full blown CD treatment, while the studio B-sides, single edits and remixes (and the cassette tape demos) are just digital downloads – and are stuck in Economy, if you’ll allow me to extend the metaphor.

And that’s precisely why I’m writing you this open letter. I believe you’ve made a big mistake by doing this and I would like you to strongly reconsider your decision to deliver 16 of the 47 audio tracks on the forthcoming Flowers In The Dirt set as ‘download-only’ digital files.

Like most of the SDE audience – and I imagine a large proportion of your fanbase –  I’m a lover of physical product, but I won’t deny that digital downloads have a place in the world. They are good at the following:

But your use of digital downloads for the Flowers In The Dirt deluxe has nothing to do with any of the above. So what’s the point, exactly? It feels very ‘gimmicky’, if you don’t mind me saying. As if someone in a meeting thought ’let’s do something quirky’ without consideration as to WHY you are actually doing it and what the impact would be. I’d go so far to say that it’s actually a mis-use of the medium.

You may well shrug and say ‘so what’. But the music – YOUR music – is too important to be lost to gimmicks. Newly remastered versions of great songs like Back On My Feet, Flying To My Home and The Loveliest Thing don’t deserve to be relegated to a ‘download-only’ zone. Why so casual with your output? Your legacy? You haven’t done this with any previous archive collection, so why do it now?

Surely a pre-requisite of a physical music box set is that you should be able to play all the music on a physical medium (CD, primarily) without resorting to bits of paper with download codes. Like many people, I don’t want two thirds of my Flowers deluxe set on the shelf and the rest in my laptop!! It’s like splitting up a pair of socks and keeping one in your top drawer in the bedroom and the other in your office filing cabinet. Think about it, you’ve diluted your own concept. Your self-styled ‘archive collection’ no longer starts and ends at the boundaries of the sturdy slip-case or the hard covers of a book. Do you really want people to be messing around registering codes at websites, unzipping files, working out how to keep them backed up, dealing with corruption issues, wondering how they are going to listen to them properly when their computer isn’t connected to anything that can match their hi-fi set-up? The books, photo-books in these sets are lovely – and you’ve deservedly won awards for past releases – but let’s not have the music marginalised to such a degree.

I recognise that it’s now likely to be far too late to change the design of the box, the disc wallets etc.. So let’s be clear, I’m not asking you to pulp 50,000 sets and start again – my practical and cost-effective suggestion is as follows:

Issue an instruction to your team to get those 16 downloads onto an audio CD. Package the CD within a simply-designed card sleeve and find a way to include this as part of every Flowers in the Dirt deluxe package that is purchased.

Why should you bother to do this? You’re Paul McCartney, you can do what you want… but consider the following reasons:

To conclude, I really do hope you do give this some serious consideration. I will put false modesty to one side and suggest that I’m as close to a subject-matter expert on these things as you’ll find. I know what I’m talking about. I spend all day, every day writing about, discussing and reviewing music box sets. I’ve curated many music box sets myself for major artists. I have a ‘sixth sense’ when it comes to knowing what fans want. Like many Paul McCartney fans I genuinely care about this particular issue and I can assure you, this ‘open letter’ isn’t some kind of publicity-seeking posturing – a random blogger making noise for the sake of it.

If you don’t believe me, consider the following. In the last few months I have interviewed Trevor Horn, Mitchell Froom and Chris Hughes for a forthcoming SDE feature on Flowers In The Dirt. This was months before I knew anything about the details of this new deluxe set.

I love the album and your music, so I urge you to read the fan feedback in detail and then do the right thing and give it the treatment it really deserves and correct this ‘download-only’ folly. 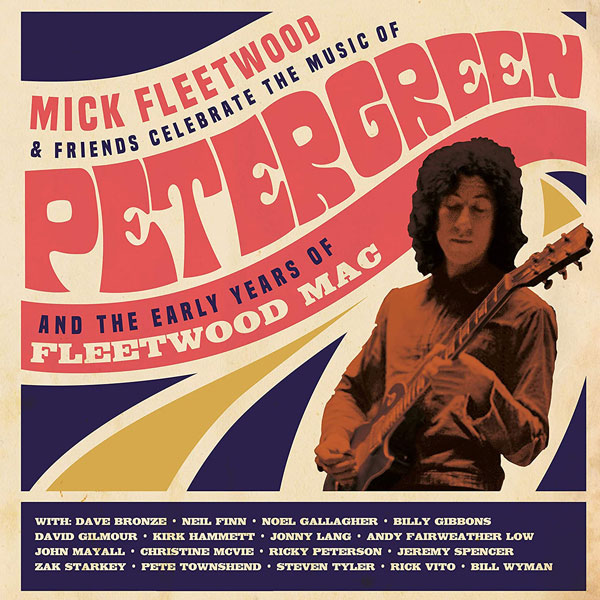 Bye, George. SDE reflects on the career and achievements of George Michael

In a year of high profile deaths, there is something about George Michael‘s passing on…