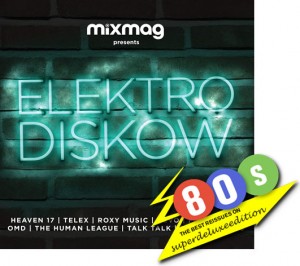 Having recently reviewed the fine Art of of the 12″, Volume Two from ZTT/Salvo, now seemed like a good time to shine a light on Elektro Diskow, a compilation released late last year on EMI Gold in association with MixMag.

Elektro Diskow, as you may have guessed by the title, concerns itself with late ’70s and early ’80s electro pop. It features artists influenced by the likes of Kraftwerk and Moroder, such as Telex and Orchestral Manoeuvres In The Dark (who also appear on the ZTT compilation).

The 29 tracks across 2CDs include a generous selection of rare dub, extended and instrumental mixes including tracks from early Daniel Miller incarnations such as The Normal (Warm Leatherette) and Silicon Teens (State Of Shock-Part 2) – both originally put out via his Mute Records label. More familiar fare is provided by the Pet Shop Boys (In The Night -Extended), Yazoo (Situation – Original US Dub) and Japan (Visions Of China).

Although the charting pop acts are as listenable as ever, most of the fun is to be had by discovering some of the relatively obscure tracks such as German New Wave band Rheingold‘s exhilarating guitar-synth fusion Dreiklangsdimensionen and Danish post-punk duo Laid Back‘s druggy (and funky) White Horse.

Despite the thick electro thread running through this compliation, there is plenty of variety in both sound and approach of each band, and much thought has clearly gone into the running order of the songs because you don’t get stuck in one groove for too long. And don’t let the magazine tie-in element put you off either – this is a cut above any cover mount CD, even if it can be found online for around a fiver.

Below is six minute whistle stop tour of some of the music to be found in this compilation. Note: The tracks on the CD are full length and not mixed together. More information and exclusive interviews can be found at elektrodiskow.com