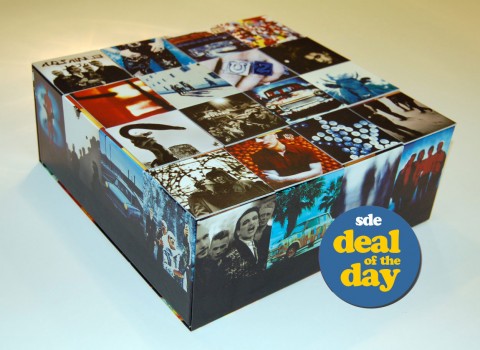 The U2 Achtung Baby UBER deluxe box set came out in late 2011.

It took deluxe editions to a whole new level with an amazing array of content. It came in an enormous “magnetic puzzle tiled box” which contained the 10 discs found in the standard SUPER deluxe box (6 CDs and 4 DVDs). Unlike that box the discs come in special bespoke digipacks in the UBER deluxe set. The box actually has drawers, it’s so big and also contained the 2LP 180g vinyl version of the album (the only other place it was issued was in a vinyl box – it wasn’t released separately) as well as the five singles all pressed on transparent vinyl, contained in special oversized wallets.

Admittedly, there was some silly stuff as well, enamel badges, ‘The Fly’ sunglasses, etc. but the numbered lithograph and copies of the U2 Propaganda magazine were quite good.

At the time this set retailed for £260 and it was deleted very quickly. They are still knocking about online if you dig deep. On Amazon UK you will need to part with £400 to get hold of one and they are €650 on the German site,  but good old Amazon in Canada are offering them for $315 CA or about £185. Add £30 to that for shipping (to the UK at least) and for about £215 in total you can pick up a brand new 20th Anniversary Achtung Baby Uber deluxe edition. Obviously that’s a LOT of cash, but it is LESS than retail at the time and relatively speaking it’s a good deal. We took many, many pictures of this set when it was released, so check ’em out and see what you think. It really does have the ‘wow’ factor, although don’t even think about trying to find a shelf strong enough or big enough to put it on.

Got this set just recently from Amazon for $53 and free shipping! The outer cover was a bit beat up, but its the insides that I really wanted, which were in excellent condition. For the price it is perfect, but for a couple of hundred dollars, it would be a judgement call on you.

Hi there to all, how is everything, I think every one
is getting more from this website, aand your views are good for new visitors.

I think what you posted made a bunch of sense. But, what about this?

suppose you were to create a killer title? I mean, I don’t want to tell you how to run your website,
but suppose you added a title to maybe get a person’s attention? I mean DEAL OF THE DAY:
U2 / Achtung Baby 17-disc UBER deluxe | superdeluxeedition is kinda plain. You should glance
at Yahoo’s home page and note how they write post titles to grab viewers to
click. You might add a related video or a related pic or two to get
readers interested about what you’ve written. Just my opinion, it would bring
your blog a little livelier.

According to the University of Pennsylvania Center for Bioethics, ”.

The Center’s stated purpose is to equip leaders and activists in order to engage the
issues of bioethics using the tools of rigorous research, conceptual analysis,
charitable critique, leading-edge publication, and effective teaching.
The broadening of biomedical ethics reached into the practices of medicine and mental health
therapy, the development of public policy and law, and in scientific research.

Many people are unaware of how to how to repair hail damage to a roof, despite it being a
problem faced by most homeowners at one time or another.
These modern-day Hoovervilles are increasingly tolerated by cities
hard hit by the housing crisis and high unemployment. The
base feet of the ladder must also be slip-resistant, and use of stabilizers and anchoring mechanisms improve safety.

It indicates the recovery period for residential rental property is 27.
Orlando also offers great nightlife and shopping making it perfect for couples and groups.
The primary function of these controlled-temperature warehouses is
to store and protect the products which deteriorate under unfavorable conditions.

That is really fascinating, You are a very professional blogger.
I have joined your feed and look forward to in search of extra of your great post.

Additionally, I’ve shared your web site in my social networks

Excellent article. Keep writing such kind of information on your
site. Im really impressed by it.
Hi there, You have done an excellent job. I will certainly
digg it and individually recommend to my friends.
I’m confident they’ll be benefited from this web site.

whoah this weblog is wonderful i like reading your articles.
Stay up the good work! You recognize, a lot of individuals are searching
round for this information, you could aid them greatly.

Hi there, after reading this remarkable post i am also delighted to share my know-how here with colleagues.

Most overrated rock album of all time. Precipitated the decline of a once-great band into uber-pretentious.

Great album but still too pricey…

Only great price is important. What is the target market for this item?

Impossible to avoid tax with amazon, ironically.
Popmarket is the only place I have never paid tax when receiving stuff. So this will end up at about £260, what I paid originally.

one of my fav album of all time, BUT so much for so few interesting things, nothing new on it, nad the 2first cd are only AB + Zooropa but AB has not been remastered, so paying so much money and having nothing new (audio or video) … what’s the point ? the vinyls and sunglasses maybe ..
give me a remastered AB cd and i’ll buy it for the 6-7th time.

Beyond stupid, both in design and price.

The antithesis of how music should be released.