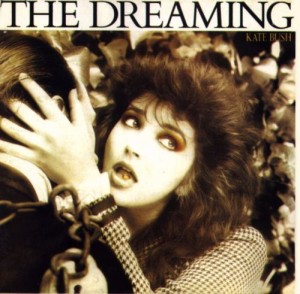 Kate Bush’s The Dreaming album from 1982 is my choice for day four of the 2012 reissue wish list.

I’m well aware that a 30th anniversary deluxe release of this rather misunderstood album, is probably a hope in vain. With the exception of Director’s Cut from this year, Kate isn’t particularly interested in her past. There were rumours of EMI planning a deluxe reissue campaign in the 12 ‘quiet’ years between The Red Shoes and Aerial, but they came to naught.

The album was the first to be produced by Kate alone. She had co-produced the 1980’s Never For Ever with Jon Kelly, and after three albums of learning and understanding the production process, Kate felt the time was right to take full control of how her next album would sound.

Peter Gabriel was a definite influence. Kate had recorded with him for his third album (“Melt”) and was thus exposed to his methods, which included not using cymbals on the album sessions. That, combined with new technology in the form of the Fairlight CMI sampler, would have a big role in shaping the approach to how Kate produced the music on The Dreaming.

Kate must have been well aware that she was trying some quite experimental sounds and ideas on her new music, and maybe because of this, she chose to release Sat In Your Lap – one the first tracks to be completed – as a standalone single, a full 15 months before the album was eventually released (the LP came out in September 1982).

It was an interesting thing to do, because Sat In Your Lap exhibits all that made The Dreaming so different to her previous work. The music was very layered, with numerous overdubs, overlapping vocals (often heavily processed) and generous use of the Fairlight sampler.

Sat In Your Lap is a rhythmic piano-driven song with a deliberately flat melody during the verse (“I see the people working…”). The song doesn’t really have a chorus as such, and it’s all very dense and claustrophobic. In many ways, it’s the most challenging song on the album, but a video was made at Abbey Road Studios and in June 1981 the single was issued and the new sound of Kate Bush was there for all to hear.

Bear in mind that Kate’s previous single in November 1980 was December Will Be Magic Again, a song that pre-dated Never For Ever and was actually recorded in 1979. It sounded like a Lionheart outtake. Following this perky Christmas single with Sat In Your Lap is the equivalent of The Beatles following up Please Please Me with I Am The Walrus.

It is remarkable then, that the single peaked at an impressive no.11 in the UK charts. Kate must have felt vindicated in her approach, and work continued with the album. Kate was not to know it at the time, but Sat In Your Lap would be the first and last single from The Dreaming to breach the UK top 40.

In September 1982 The Dreaming was released in the UK. Ten tracks, full of wonder and imagination, covered subjects from war (Pull Out The Pin) to the protection of Aboriginal  homelands (The Dreaming). The album ended with the remarkably aggressive Get Out Of My House. The pop music on the record was like no other at the time, or since. Kate’s ability to sing low in her range for verses and then come shrieking in with multi-processed ripostes, for choruses or refrains is quite unique.

Although The Dreaming hit no.3 in the UK chart, it was not a commercial success. The Dreaming (the song) was a poor choice of single in July 1982. It’s a superb track featuring Rolf Harris on didgeridoo and Kate singing with her quasi-Aussie accent (“Bang! goes another kanga on the bonnet of the van”) but just not a song that would ever get much radio play (it peaked at no.48).

In fact, one of the big problems with the album from a commercial point of view is that it contains nothing resembling a commercial single. EMI, perhaps influenced by the ‘success’ of Sat In Your Lap did not seem to pick up on this, and Kate was not asked to do some more work on the record and ‘come up with a hit’ (probably unthinkable for them to do this with Kate).

This lack of hits (third and final single, There Goes A Tenner, didn’t even chart) is one of the reasons why the album is not well known, but on the other hand it makes it much easier to listen to the record as a singular piece of work without a Babookska or Wuthering Heights to remind you of Top Of The Pops appearances and leotards.

Kate was canny enough to recognise this no-singles problem when it came to her next album, Hounds Of Love. For that record she wore her commercial hat on side one (relatively speaking) and then tossed the hat on the fire for side two (The Ninth Wave). Running Up That Hill therefore created the audience for Waking The Witch.

In the end, the critics didn’t really know what to make of The Dreaming. ‘Mixed’ reviews is probably a good summary. “Overproduced” is probably the most common criticism. Generally speaking, it’s come to be recognised as a significant work and many fans would include in their top three Kate albums, if not jostling for number one spot with Hounds of Love.

What to include in a deluxe reissue? It’s a good question. A 2CD+DVD could include the b-sides of the singles, plus the slightly different single mix of Sat In Your Lap. Outtakes, demos or work-in-progress would be excellent, but unlikely. The Dreaming could certainly do with a remaster, or even a full-remix, and the DVD could provide all the videos plus some excellent, fairly well-known European TV appearances.

ALBUM: The Dreaming by Kate Bush
ANNIVERSARY: 30th
WHY REISSUE?: Could do with a remaster/remix. An underrated classic.