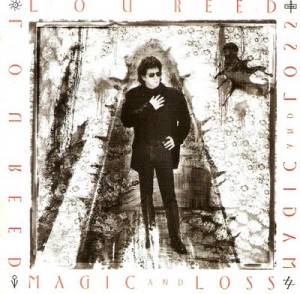 Magic and Loss was Lou Reed’s third album in as many years.

After the critically acclaimed New York album of 1989, the ex-Velvet Underground man teamed up with his old band mate, John Cale, to celebrate Andy Warhol’s life with Songs For Drella (1990).

That album was regarded as an intelligent and thoughtful memorial to their old friend, even if they couldn’t get on well enough to tour the record (Cale vowed never to work with Reed again).

Lou Reed didn’t care about that, he was on something of a creative roll. Magic and Loss (released in January 1992) proved this by surpassing the quality of Songs For Drella and giving New York a good run for its money.

The album is similar in some ways to Drella in as much that it is another memorial, this time in remembrance of two of Reed’s at-the-time recently deceased friends, Doc Pomus (the singer and songwriter) and a women referred to as ‘Rita’.

The album is basically a concept album – a quiet meditation on life and death. The unfairness of a life that is capable of bringing a painful and untimely death to our loved ones. Our suffering, their suffering.

Yes, it’s not a bundle of laughs. You will not be seeing any tracks from this chosen on American Idol, or being sung along to on Rockband.

But what’s so great about this record, is that it re-affirms your love of music as an art form. The honesty and intelligence with which Lou Reed approaches the subject matter is truly amazing. Over the 14 tracks the singer takes us through a wide range of emotions from sadness, anger, resignation and even some gallows humour. It’s a very grown-up and accurate evocation of loss and powerlessness. Anyone who has ever lost someone will be very moved by this record.

The perspective of the songs varies. No Chance (Regret) eloquently, and simply, expresses the sorrow in missing the opportunity to say goodbye to someone who has recently passed away.

Magician (Internally) puts us in the mind of the sufferer, one minute wishing for some magic “to sweep me away” but then deciding that they “want a miracle…I don’t want to die”

Dreamin’ (Escape) has painfully pretty guitar phrases as a counterpoint to the usual semi-spoken delivery of Lou Reed as he remembers his friend “If I close my eyes I see your face and I’m not without you”.

Some welcome light relief is served by Harry’s Circumcision, a macabre tale of how “Harry” readjusts his features with his cutthroat razor after looking in the mirror and realising that he was “turning into his parents”.

The music co-authored with Mike Rathke is outstanding, with some superb guitar work from him and Reed. Also, it’s worth pointing out that the album is not all quiet and tasteful. What’s Good, Power and Glory Part II and Gassed and Stoked all ‘rock’ to one degree or another.

The last, title track of the album, is where Lou Reed attempts to sum up his thoughts on events. Magic And Loss (The Summation) concludes that “There’s a bit of magic in everything, and then some loss to even things out.” Although I think it’s said more eloquently at the beginning, on What’s Good “Life’s good, but not fair at all”.

A 20th anniversary edition would be welcome simply to recognise, by reissue, what a great work this is. A bonus DVD would add the album played live in concert which was released on VHS, and an additional CD could provide the audio of this live gig.  What’s Good was also released as a single in some territories with an instrumental outtake The Room as a bonus track as well as two lyric readings A Dream (From Songs For Drella) and Harry’s Circumcision.

The Songs of Bacharach & Costello