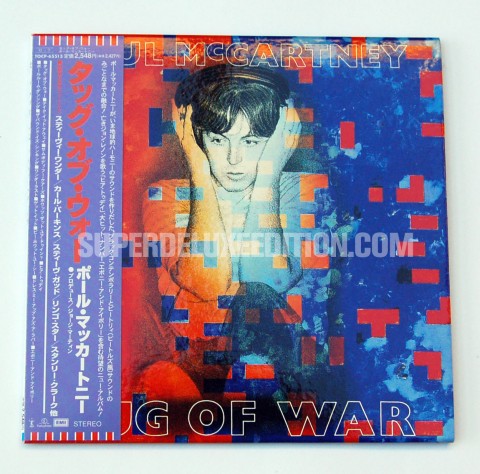 Between August 1999 and April 2000 EMI-Toshiba Japan issued all of Paul McCartney‘s post Beatles albums as vinyl replica mini-LP CDs. These started with McCartney from 1970 and ended with 1986’s Press To Play. Why Flowers In The Dirt, Off The Ground and Flaming Pie were excluded is anyone’s guess.

These are extremely high quality, in terms of the packaging, with VERY thick card for the jackets and appropriate finishes for the front covers. Inner sleeves are reproduced, as are posters and other elements from the original vinyl. The Wings Over America set is probably the most desirable because it is the only place you’ll find the record as a three CD set, with the track listing echoing the three-LP release.

We’ve selected Tug Of War from 1982, one of Paul’s very best albums with some strong singles (Tug Of War, Take It Away) coupled with a generous selection of satisfying album cuts (The Pound Is Sinking, Somebody Who Cares, Wanderlust) and a proper tearjerker (Here Today). Ebony and Ivory rather spoils the party at the end with its tweeness, but overall it’s a great record. George Martin’s production has the just the right dosage of ’80s sheen (Be What You See (Link), Dress Me Up As A Robber) something that he arguably pushes to far with the more dated follow-up Pipes Of Peace.

The album features an incredible amount of collaborations; McCartney works with Carl Perkins, Stanley Clarke, Ringo and of course he jumped-started his professional association with George Martin. Tug Of War also saw the start of a fruitful working relationship with 10cc’s Eric Stewart, whose backing vocals with Paul and Linda were particularly effective.

One of the pleasures of the original vinyl is the way Brian Clarke’s front cover artwork pervades the whole package. The back cover features the painting sans Paul and the inner sleeve – with an excellent moody photo of McCartney at work – also uses elements from the same painting. All this is replicated by this mini-LP CD. Fact fans might be interested to know that if you walk past Paul’s head offices (Soho Square in London) you will see this original Tug Of War artwork hanging on the wall if you have a peek through the window!

This Japanese CD comes with the usual protective sleeve and booklet with lyrics in Japanese and English. A word of warning if you try to seek some of these out; there are a LOT of fakes on eBay. In general unless you get very lucky with someone offering the genuine article at a low starting price you will struggle to pick any of these up for less than £30-40 but will probably have to pay more than that. Any item from Latvia, Russia, Estonia for low prices will be fakes.

Unfortunately, there was no official promo box from Japanese retailer Disk Union in which to house your Macca mini-LP CDs but nonetheless these are lovely (but expensive) items to try and collect.