This bank holiday weekend I’ll be sorting out my CDs

It’s a bank holiday weekend in the UK, but of course a very different one since most of us will be in ‘lockdown’ at home, doing our bit to help minimise the spread of the COVID19 virus. With so much time at home, I have plans to reorganise my CDs and not feel guilty about it, but I have to admit I’m slightly depressed at how best to organise and display a lifetime’s collection.

The simple ‘problem’ is that I now own too many CDs to practically display in one room. I’d estimate my collection is approaching 5,000 in number and there’s two main issues. The first is that simply this is too many CDs for one single room-in-a-house physical location and the second is that even if I could do this, I’m not sure I really want to anymore.

As a teenager, the the idea of a music room lined with wall-to-wall racking of CD shelves was quite appealing. But then so was a diet of hot dogs and coca-cola. I guess part of the appeal was you’d show off your enormous collection to all your mates and you’d have everything to hand should you need to dig out some obscure CD single from 1986, at the drop of a hat. In reality, very few people outside close friends would ever see your enormous collection and on the off chance some stranger did, they’d probably look at you like you should be featured on that ‘hoarding’ program on ITV. Also, most of the time you don’t need access to that CD single, so does it need to be on display at all times?

Up until the late 1990s, I had a large but manageable collection. Probably less than 1000 CDs, and they would all be in one place. But then it grew and life got in the way of keeping properly organised. I got married a few years later, moved house, had kids and there was a period where I boxed up a large part of my collection and put them in the loft, with ‘plans’ to bring them all down and display them somewhere or other. But while these other CDs were in the loft (I would semi-regularly go up there and bring things down when needed) I was still buying  CDs which were filling up new shelving that I had procured. I then had a situation where my home office – with about half my collection on display (the other half in the loft) – was redecorated and became a reception room. My wife ‘advised’ me that she didn’t envisage hundreds of CDs as an attractive part of the decor, so my shelves were dismantled and put in the loft for a while, along with some of the newer collection, which now joined boxes of CDs which had been in the loft for years, by this time.

My office moved upstairs and some CDs with them and meanwhile there were also CDs in a big closed storage unit downstairs and some in a cupboard with some DVDs near the TV. Additionally, there were also some random cardboard boxes of CDs lying around of discs that I’d ‘de-prioritised’. My thought process here was along the lines of does-some-slightly-generic-eighties-compilation-that-I-probably-bought-in-a-charity-shop-because-it-was-50p-and-might-have-a-rare-single-edit-on-it-deserve-the-same-space-as-‘Hunky Dory’?

In short, I got to a situation where there were compact discs virtually EVERYWHERE in the house and I never knew where anything was. I’d have to search in at least five places (including the loft) all of which weren’t alphabetised. A bit of a nightmare. If it was cheap, occasionally I was known to buy something again, that I knew I owned, rather than spent half a day hunting around the house for it! Crazy, I know.

In recent years, I’ve made an effort to try and get the collection logged in Discogs, largely so I know where everything is (“It’s in Loft Box #7”). This is certainly good at preserving sanity but it still doesn’t solve the fundamental problem. 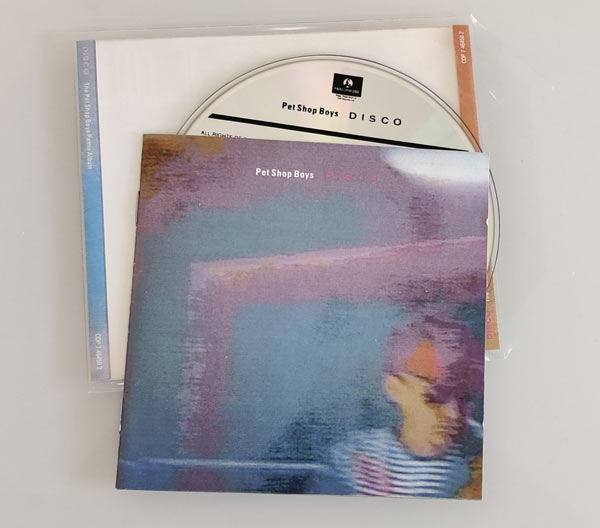 Get rid of your jewel cases and store CDs, booklets and backing sheets in clear wallets

I have a wall in the SDE office with some art prints hanging up. The ‘Car’ Peter Gabriel album cover for example and a framed poster for Francis Ford Coppola’s ‘The Conversation’. I love looking at these and they give the room space to breathe. Now, I could choose to get rid of them and put wall-to-wall CD racking up, but the point is I don’t want to do that anymore. I love CDs and I love music, but not so much that I want to spend large parts of my day working with my laptop effectively in a CD warehouse.

My solution is to put on display the ‘core’ part of my collection in the office, and then have a secondary, overflow collection somewhere else. Granted, I haven’t worked out precisely where this overflow should be located and at this moment in time (it might have to be the loft) but that’s the general plan. The difficulty is of course working out what constitutes ‘core’ and what doesn’t. To give you an example, my Duran Duran CD collection is about 10-inches long (fnarr) but that’s albums only. If it also included all the various CD singles it would be easily double that, so they have to be sacrificed, to save space. It’s not perfect, because sometimes you want to hear a remix or a B-side from a single, but as politicians like to say, tough decisions have to be made. If I was sensible I’d digitise all the overflow CDs, but it’s a very time-consuming task.

I’ve mentioned this before on SDE, but the other thing I’ve done is chucked out all my jewel cases for space saving. CDs, booklets and the backing sheet thing are all safely stored in bespoke plastic sleeves. This saves an enormous amount of space and while people said a few years ago that I’d regret doing this, I have to say I haven’t at all. It felt quite positive chucking out all that plastic. The lack of spines on display isn’t an issue either as there’s plenty of digipaks in the mix to remind you ‘where you are’ in your A to Z.

If there’s one thing that’s clear, it’s that these situations are always a work-in-progress. You’ll never get to ‘the end’. You can invest fortunes in bespoke carpentry, and flashy shelving solutions, but nine times out of ten there will still be a messy pile of CDs nearby that you ‘haven’t sorted out yet’! It’s the nature of the beast.

I’d love to hear some of your storage challenges. Leave a comment! Also, if you fancy a closer look to that image at the top, click on this link.