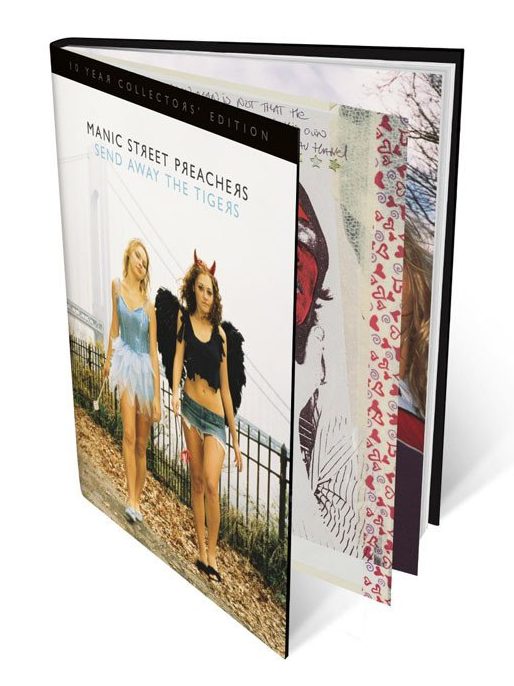 Plenty of news this week, including the fact that the Manic Street Preachers will reissue a 10th anniversary deluxe edition of their 2007 album Send Away The Tigers.

There’s a few points to reflect on here, the first being that both The Holy Bible and Everything Must Go were reissued twice, once for the tenth anniversaries and again ten years later for their 20th birthdays. Does this mean that we can expect another Send Away The Tigers in 2027? I suspect not, although ten years is a long time in the music business.

The other observation is that Manics’ box sets are getting cheaper. After the very expensive Postcards From A Young Man super deluxe edition (available for a bargain price from the SDE shop) and the inflated and flawed National Treasures CD singles set, it would appear that the penny dropped and the band realised that if they want to sell more, then these need to offer better value and should be more affordable.

The Generation Terrorists limited box was available fleetingly, for around the £50 mark, as was the Holy Bible 20 box set. Both of those came with vinyl elements (10-inch EP for the former, 12-inch LP for the latter) but the band have chosen not to bundle vinyl and CDs together for Send Away The Tigers. In essence, I suppose you can say that they’ve not really bothered with a box set at all, since there are only two physical editions: a 2LP version of a 2CD+DVD. The good news is that the 2CD+DVD set has already dropped to £18 in the UK and the double vinyl edition is the same price! Great value.

What they did do was offer a limited amount of signed versions of each format, although unfortunately, their website couldn’t cope with the traffic and many people (myself included) were simply not able to add any signed product to their ‘cart’. By the time the system worked again the signed editions had sold out. Sony told me that 500 of each were signed, and they were all gone within 2 hours if, not quicker. One feels sorry for fans busy at work who get online at lunchtime to find that these had been and gone.

Read more about the Send Away The Tigers reissue here.