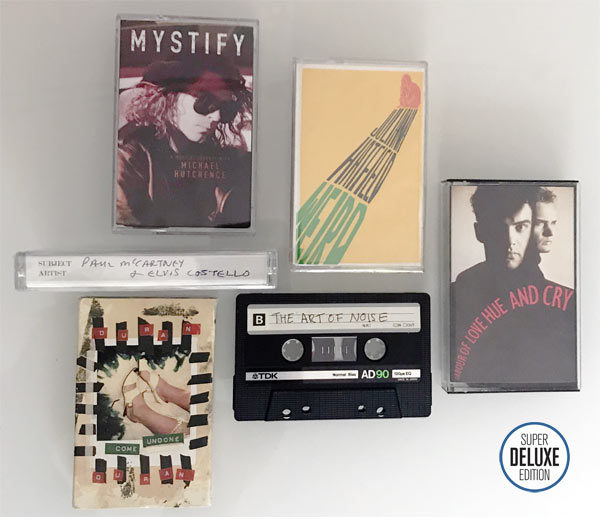 Media coverage this week informed us that ‘UK Cassette Sales Up 94% In First Half Of 2019‘. Yep, amazingly, 35,000 tapes were sold in the first six months of this year, which apparently accounts for 0.2 percent of total album sales in the UK.

What do we think about this? It’s a bit of a weird one. Reviving the cassette tape seems much more contrived than the current vinyl ‘boom’. Labels are creating special ‘coloured’ cassettes, putting them in special bundles in artist stores with vinyl and CDs, inserting them into super deluxe edition box sets and hoping that curiosity, nostalgia and perhaps some kind of kitsch appeal will tempt buyers. You could say that tapes are like the Polaroid camera of the audio world… vaguely cool, but slightly pointless when you can take now 12 megapixel photos on your mobile (and of course play hi-res audio on the same device).

I must confess I used to LOVE tapes. In the 1980s, it was my format of choice. I would buy pre-recorded tapes (not vinyl), spend pocket money on TDK AD and SA90s and tape albums lent by friends at school (that Art of Noise cassette in the main image is one of my old tapes) and make my own compilations (or ‘mixtapes’ as no one in the UK called them). I would be a nerd and fill in the ‘technical details’ on the back of the card insert when I created compilations, pretending I was Geoff Emerick in Abbey Road (or something).

Far from ‘killing’ music, the cassette tape nurtured my love for it and set up me as a ‘consumer’ who has since spent a ludicrous amount of money over the years on CDs, vinyl and the hi-fi kit to play it on. Indeed, my dad once warned me (via the medium of shouting very loudly) that I’d ‘end up in jail’ if I kept up my level of music spending in the early 1990s, because I’d never be able to pay off my credit cards. Reader, I didn’t (end up in jail, that is).

As well as ill-advised spending that often prioritised music above, er, food, I’d do other stupid things. For example, I went travelling in America in the summer of 1989 and I had one suitcase full of clothes and another suitcase full of tapes. I’m not joking. I had an entire suitcase to accommodate my love for music and make the journeys on the Greyhound bus bearable. Travelling light wasn’t my thing. I actually had a Yamaha portable keyboard with me too, for ‘songwriting’ (but that’s another story).

That’s the thing, the cassette tape gave us so much, when you think about it. It made music portable (in conjunction with the Sony Walkman), helped you woo that girl or boy you had your eye on by way of an oh-so-cool compilation and enabled you to grow your collection exponentially thanks to those tape-to-tape machines and their ‘high-speed dubbing’! You could even start your own band and use standard tapes in £250 portastudios and record four-track demos!

Basically, cassettes rocked! So if anyone was going to speak up for tapes it would be me. But this relationship didn’t have a Hollywood ending. In the early 2000s I chucked out all my compilations and gave most of my pre-recorded cassettes to charity. I hung on to my collection of cassette singles for rarity/sentimental reasons but it was basically ‘adieu’. Tapes were dumped and I was in a new relationship with mini-discs (a bit of a one-night stand, that one). I’d been ‘seeing’ CDs for ages too.

The Sharp QT90 (there was a white QT89 too). Click image to enlarge

A few years ago I had to actually buy a cassette player because Sam Brown had given me a shoebox full of her old demo tapes which I had to listen to as part of the research for what became The A&M Years box set. And what I discovered is that no one seems to make any decent ones anymore. There are no ‘high end’ players. The only brand new model I could find was made by TEAC. I bought it and was unimpressed. It was around £250 and didn’t even have Dolby. Apparently Dolby no longer license their noise reduction system for cassette tape manufacturers, so there you have it. The TEAC machine felt average and plasticky. I kept my Sharp QT90 tape player from the 1980s and everything about my old machine seems much better, especially in terms of build quality (see image above).

So what are people playing tapes on in 2019? Are they even playing them at all? Some of them don’t even come with download codes, so if you haven’t got the kit, they are about as useful as those marbles in the Pink Floyd box sets.

In summary, with no quality hardware to play them on in the marketplace, a record industry basically chasing a fad (with no guarantee of future product) and ultimately the general shortcomings of the tape as a ‘music delivery device’ in 2019, I’m not really tempted to embrace cassette buying. I have wonderful memories of buying and listening to music on that format 30 odd years ago, but as the saying goes, you can’t reheat a soufflé.

Instead of pissing around with tapes, maybe the industry could do things like… I don’t know… release more music on CD. Why revive a format that sells sod all, when you could spend those marketing dollars and pounds on ensuring the best selling format at this moment in time – the CD – doesn’t decline. That’s seems like a much better idea to me.