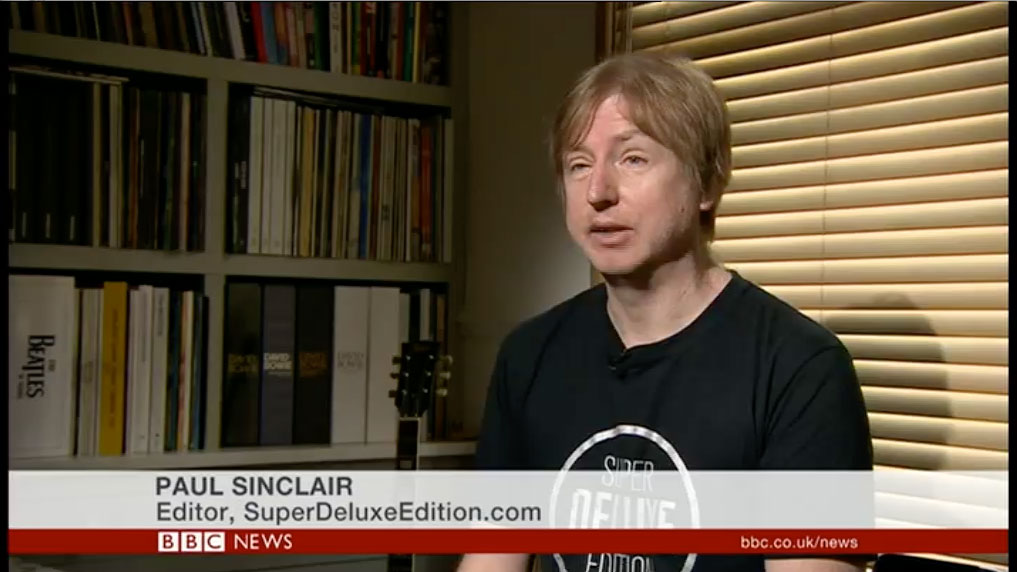 SDE… As Seen On TV

Last week the BBC reached out to me to see if I’d like to appear on the national TV on the BBC One’s ‘News at One’ to talk about Sheryl Crow‘s statement where she said her master tapes had been destroyed in the archive fire at Universal Studios back in 2008. Well, I wasn’t going to say no to that opportunity…

It all happened very quickly/ The idea was touted late in the day on 25 June and the editor and crew were round at SDE HQ at about 10am the next day (cue some frantic ‘tidying up’) to film the segment. Blinds were closed to help the cameraman control the light, and I was suitably positioned in front of a shelf of various vinyl records and box sets and then… “action!” For a brief moment I though about Michael Caine’s advice on his famous ‘Acting in Film’ masterclass where he said the hardest situation is the person who has just one line (“The Germans are crumbing…”) but tried to put it out of my mind.

I rambled on about what a master tape is, why it’s is important etc. for about 15-20 minutes and of course that turned into 20 seconds of comment on the actual bulletin, but hey, I’m on the news, mum!

It was really a case of ‘keep it simple, stupid’. I was going to mention the difference between a stereo master and a multi-track master for example, but that was (correctly) deemed as ‘too technical’ for the mainstream audience watching the one o’clock news on a Wednesday afternoon.

This is actually my second ‘stint’ on the BBC, having recorded an interview for BBC Radio 4’s consumer programme ‘You & Yours’ a few years back, where they were doing a piece on music box sets.

Unfortunately, there’s no link where I can share this appearance on BBC news. It was on iPlayer for a few days. Reflecting on the wider issue of the destroyed master tapes, it will certainly be interesting to see how Universal Music deal with this, publicly.