SDE Editor, Paul Sinclair, is in New York during Thanksgiving, Black Friday and Record Store Day. He’ll be checking out the best of what record stores are left in Manhattan, heading over to Brooklyn for more vinyl and CD exploration and talking to shop owners, and record buyers. Read about his adventures in this last diary post of the trip.

I’m certainly putting in the mileage. I wish I had one of those ‘Fitbit’ activity monitors, because I’ve done SO much walking – my feet are sore, my back is sore!

I was VERY tempted to head down to Princeton today, to the Princeton Record Exchange (described by one SDE reader as ‘the second best record shop in the world’) but after careful consideration I decided there was still too much I hadn’t done in New York and a three-hour round trip out of town to see one record shop (however good) wasn’t the right move. This would be my last day of record-shopping, so it would be ridiculous to go home on Sunday evening without seeing what Brooklyn had to offer.

But before Brooklyn there was still unfinished business in Manhattan. I hadn’t been to Generation Records, Other Music or Academy Records yet, for example.

Having written yesterday’s Saturday Deluxe and the NY diary post for Friday (SDE isn’t going to write itself) it was a late start as I left the hotel at around about 10.30am. In fact I missed my ‘continental’ breakfast, so vowed to pick up the tried and tested cappuccino and croissant combo, somewhere on route.

First stop was going to be Generation Records since it was very close, just south of Washington Square Park on Thompson Street. Despite my late start the shop was closed. Grrr. I didn’t open until noon. Oh well, I’ll come back later (spoiler alert: I never did). New plan: I’ll head West to Other Music which is fairly near. That was closed as well (opens at noon, too). Argh! A record shop, a record shop, my kingdom for a record shop.

I could have hung around I suppose, but I wasn’t that convinced that Other Music was going to have lots of stuff I was interested in anyway, describing itself as ‘hip underground record store’ (I’m not very ‘hip’ – that’s what my kids tell me, anyway). I refuelled with with that coffee and pastry and headed north east to Academy Records. Enough of this walking malarkey though, I have a Metrocard and I’m going to use it.

It was open, which was a start, and it was really busy, helped no doubt by its city-centre location. This shop reminded a little bit of Reckless Records in London, although the clientele was much more varied, there were all walks of life in here, not just your archetypal record-buying obsessive. The front section had used CDs, DVDs and vinyl with the back area serving fans of classical and jazz. 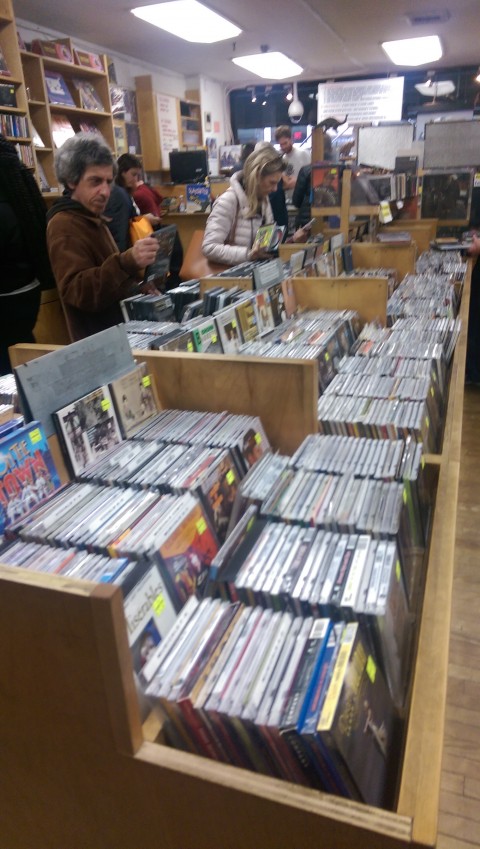 Pricing was competitive. For example, I spotted the double SACD version of Bob Dylan‘s Blonde on Blonde for just $6.99. The 20th anniversary CD of Pink Floyd’s The Dark Side of the Moon was only a dollar more. 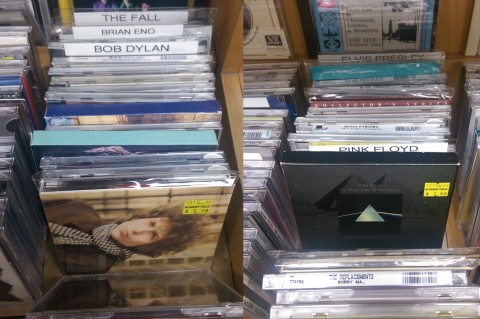 There is a ‘cheap’ section above these main racks with CDs starting at $2.99. After a bit of scanning, I spotted the US CD single of XTC‘s King For A Day ($2.99) and Suzanne Vega‘s Beauty & Crime album for the same price. Done!

It was time to head over to Greenpoint area of Brooklyn to check out what seems to be a thriving record-store community. Because the East River sits between Manhattan and Brooklyn, my perception was that the subway ride would take a while, but the reality is that it’s a very quick and short journey on the ‘L’ line from Union Square to Bedford Avenue where I alighted. A walk down through McCarren Park took me to Co-op 87 Records on Guernsey Street.

The shop has been open for about four years and co-owner Mike Hunchback has been running and working in record stores most of his life. Co-op 87 is a fairly compact store but as Mike pointed out to me, this has it’s advantages since your premises have less chance of being taken over by coffee shops etc. It’s mainly vinyl only, with a large selection of house/Italian disco 12-inches, although I spotted some 80s pop too.

I picked up the US 12-inch of Swing Out Sister‘s Breakout (complete with ‘Carnival Mix’, which remains unreleased in the UK) and from a cabinet full of $1 and $2 VHS tapes I spotted Frankie Goes To Hollywood‘s From A Wasteland To An Artificial Paradise VHS, so snagged that too! It’s surprises like this that make visiting actual record shops such fun. 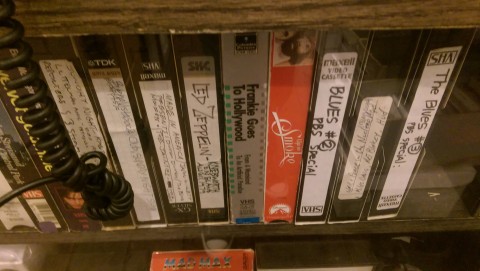 Mike was a great guy and took the trouble to print me out a map with instructions of how to get to some other record stores in the area, namely Captured Tracks, Record Grouch, The Thing and Academy Records.

Captured Tracks is a basement shop on Calyer Street, about three blocks away from Co-op 87, down Manhattan Avenue.

This place has the biggest collection of cassette tapes I’ve seen for years. I did keep an eye out for any rare cassette singles, but it was mainly a variety of rock/pop/indie albums from across the decades. But in the main, this bright and friendly record shop contains new and used vinyl. There are tons of 1980’s 12-inch singles for $3 a pop and there was a wide selection of new Record Store Day releases.

There was a ‘sale’ bin which included a sealed vinyl copy of Light in the Attic’s Mark Lanegan Has God Seen My Shadow? anthology. A snip at $20. Two 12-inches caught my eye, the German version of Paul Hardcastle‘s 19 and a promo of Lloyd Cole‘s She’s A Girl and I’m A Man which has a very nice front cover. Both ended up in the SDE shopping basket. 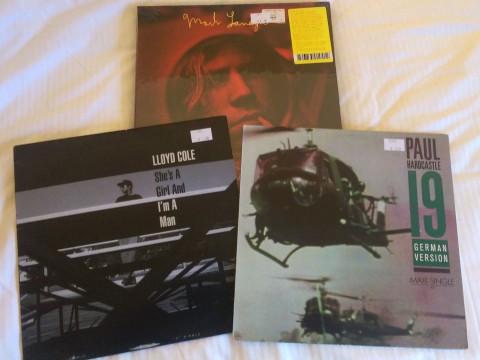 Record Grouch is on the high street, further down Manhattan Avenue, in the heart of Greenpoint. The shop largely stocks vinyl, although there is a reasonable selection of CDs and a few box sets.

They had a sealed copy of the the Lee Hazlewood Industries There’s a Dream I’ve Been Saving box for just $60 which is a bit of a bargain. I was very, very tempted by a David Bowie VINYL Sound + Vision box for $80, but in the end I didn’t pull the trigger. I always try to buy something from each store I visit, so I walked out with a promo 12-inch of Thomas Dolby‘s Dolby’s Cube (to go with my Hot Sauce 12-inch bought on Day Two) and a vinyl copy of Merry Christmas Mr Lawrence. Co-owner Brian did me a deal – $5 for the both.

It was getting late and I was going to cut the day short and miss out Rough Trade which was on my list. But still time to visit a crazy mother of a store The Thing, which is more or less across the road from Record Grouch.

This place is absolutely FULL of used vinyl at $2 each. There is an unbelievable amount but it is heaven and hell in equal measure because nothing is in any kind of order. It’s all random. As one member of staff said “think how many DJs were in New York in the eighties. All that vinyl has got to go somewhere”. The problem is most 12-inches don’t have proper spines and as you can see from the image below, you have to do it the hard way and pull most records out to see what they are. And there is a load of dross mixed in with some gems. In one row of vinyl I saw a Stravinsky Piano Concerto, a Johnny Mathis album and a Samantha Fox promo 12-inch! 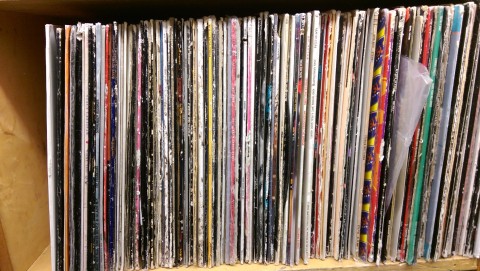 I persevered, but after about 45 minutes to an hour you do kind of lose the will to live. In the end I walked out with five records including the US 12-inch of Curiosity Killed The Cat’s Misfit with the rare-ish Club Mix and Dub Mixes on the B-side.

I’d definitely had enough for the day, and it was time to head back to the hotel and try and get to the Cinema to see The Martian!

Sunday will see me return to London and I’ve very much enjoyed this New York adventure. Thanks for your company and I hope to do something similar again next year, so let me have your suggestion for great cities to visit for record shopping.