SDE Editor, Paul Sinclair, heads to New York for a few days to take in the Big Apple during Thanksgiving, Black Friday and Record Store Day. He’ll be checking out the best of what record stores are left in Manhattan, heading over to Brooklyn for more vinyl and CD exploration and talking to shop owners, and record buyers. Read about his adventures for the next few days in these exclusive diary posts… 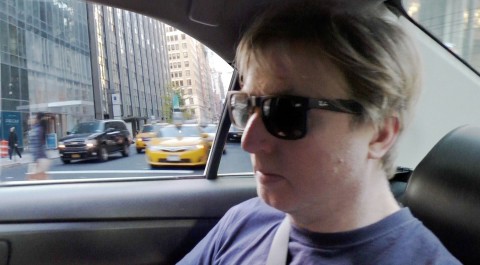 After the inevitable early start, I’m on DL1 (Delta) from London Heathrow to New York City.

I was vaguely aware that wi-fi was available on aeroplanes but I thought that was slightly more theoretical than, er,  actual. However, upon enquiring, I was encouraged by a stewardess who assured me that it should be fine. Since the battery on my laptop was only about 50 percent full and Apple have been telling me for ages (via the power symbol on my MacBook Air) to “Service Battery” there seemed little point in buying the ‘full flight’ option from Delta, because with no power socket available, my computer was going to go die on me in less than two hours. So I selected the $19.99 one hour option. Somehow this airline have managed to do across the Atlantic Ocean, what the UK’s East Cost Mainline (now Virgin East Coast) train service couldn’t do between London and Leeds – that is deliver a wi-fi service that is largely reliable and just works.

This allowed me to post about The Early Motown EP box set, tweet about how I’d joined what I’m calling the ‘Mile High Blogging Club’ (MHBC) and send my wife a ‘you’ll-never-guess-where-I’m-sending-this-from’ email. Maybe transatlantic wi-fi is old news to some, but, hey, I think it’s amazing!

The flight landed at JFK about 1.30 local time and once through customs (“what’s the purpose of your visit?” me: “Blogging”) I jumped in a cab.

It was a beautiful, sunny afternoon and after a pleasingly fast-driving cabby (let’s just say I put my seatbelt on) we arrived promptly in downtown Manhattan. It turns out that my home for the next four nights – The Washington Square Hotel – has appropriately ‘rock ‘n’ roll’ credentials, because it’s where The Rolling Stones stayed on their first US tour and has provided a bed for the night for the likes of Bob Dylan, Chuck Berry, The Mamas and the Papas and Joan Baez.

It’s in the heart of ‘the village’ (I was told never to say ‘Greenwich Village’) and the plan is over the next few days to visit as many record shops as possible. Early warning: I”m going to try and do some live Periscope events, that will hopefully involve me taking/talking you around some groovy places. If you don’t know about Periscope, it’s the latest groovy social media ‘thing’, which involves pressing a button on the app on your phone and in an instant you’re broadcasting to the world. Viewers can send realtime text messages which the person doing the broadcast (me) can answer (by speaking) or respond to (by moving the camera somewhere interesting). Be aware,  you need to follow SDE on twitter to get the ‘live broadcast’ message. This is because Twitter bought Periscope and have semi-integrated it with Twitter.

After checking in, the sensible thing would have been to have got a few hours shut eye, since at this point I’d already been up for 14 hours, but sod that, I’m in New York City! Time to go for a wander… 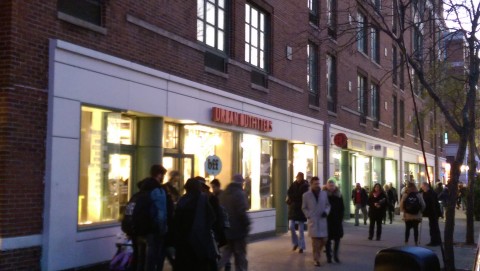 I came across an Urban Outfitters and I remembered reading this article a while back, about how they are supposedly the world’s largest stockist of vinyl records. Okay, not the *coolest* place to start, but I went in to have a look.

It turns out that they don’t appear to sell used vinyl anymore (at least this branch didn’t) which was a disappointment, but they had a decent selection of new and classic releases. Adele’s 25 (of course!), lots of Taylor Swift, Lana Del Rey but also Led Zeppelin, Fleetwood Mac and The Beatles. Such is the clout of the retailer they are going the Target, Best Buy and Walmart route, doing special ‘exclusives’ which in the main appear to largely revolve around exclusive covers, or unique coloured pressings rather than offering extra tracks.

Okay, so enough of Urban Outfitters, time to go in search of more independent fare! I was loosely heading towards Bleecker Street with a view to locating Rebel Rebel Records, but as it turned out I walked down it in the wrong direction and was walking away from Rebel Rebel. Luckily it didn’t matter, because I ended up coming across Village Music World. Just one look at the outside and I knew I’d hit the motherlode. This looked like just the sort of place that existed in London’s soho, or Chinatown in the eighties, or early nineties. 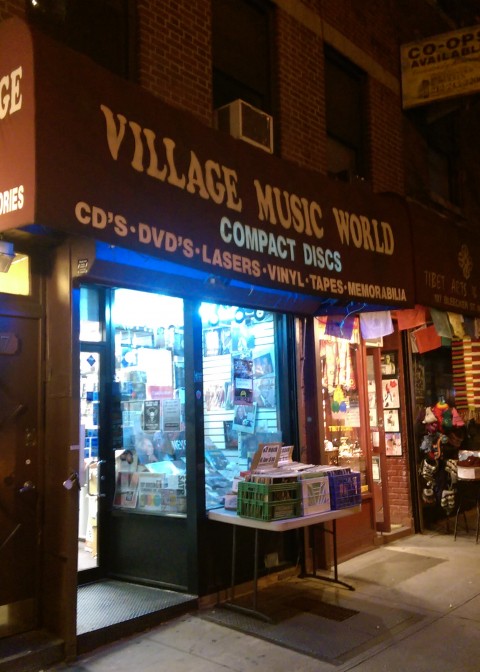 Village Music World has been here for 25 years and is a narrow but deep shop stuffed full of vinyl, CDs, DVDs and tapes (I didn’t see any “Lasers”). Loads of boxes of stock in and around the counter area was the telltale sign that they are participating in Record Store Day on Friday and in fact they have an impressive stock of ‘old’ RSD releases, such as Rolling Stones‘ seven-inch singles, the Nilsson Sessions 1967-1975 vinyl and loads of the supposedly hard to get hold of David Bowie Changes seven-inch picture disc.

I was in there for ages and the owner agreed that I could do a live Periscope broadcast from the shop. I’m planning to do this on Saturday morning local time which will be mid-to-late afternoon in the UK. Follow SDE on Twitter to tune in and I’ll literally show you around the inside of this shop, while you ask questions.

By now I really was flagging. I hadn’t eaten for seven hours and it was starting to get cold and it was after midnight in the UK. Time to head up to Madison Square Park for a Shake Shack burger.  I hadn’t actually realised that this was an ‘outdoor’ restaurant, but I was starving by the time I got there, so I wasn’t complaining and it was very pretty.

Appetite sated,  I headed back to the hotel for an ‘early’ night. Although I ended up watching Planes, Trains and Automobiles which never ages and seems to get funnier with repeat viewings. This being US network television, they destroyed the humour in the “I want a fucking car, right fucking now… ” scene by editing all the ‘fucks’ out of it!

Of course, the film was being shown because its Thanksgiving today. I’m very happy to be in America for Thanksgiving, so Happy Holidays to everyone in the US!

Check back tomorrow for day two of my New York diary.