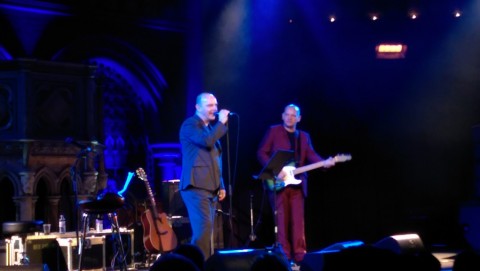 I first saw Hue and Cry live back in 1987, when they were a support act for Madonna at Roundhay Park in Leeds when Madge was on her ‘Who’s That Girl’ tour.

It was a little bizarre at the time, I must admit, seeing this hitherto unheard of band playing on the same bill as  superstar Madonna – very much in her ‘imperial’ phase – and no doubt this was the result of some record label/management lobbying. But there was some method in this madness because Scottish siblings Pat and Greg Kane might only have had one hit record to their name [at that time], but it was what would become their signature tune, Labour of Love, and the timing was perfect, since they were riding high in the UK top ten that very week with the song.

Fast-forward 29 years to 2016, and last night I saw the band play live for the only the second time. The audience has shrunk, but so has the band – reduced down to the core of the two Kane brothers. This arrangement seems to suit both parties well and the intimacy and beauty of London’s Union Chapel was light years ahead of standing in a boggy field straining to see a stage far in the distance (and wondering what time Madonna was coming on).

As my Kate Bushian gap between gigs might indicate, I’m a bit of a fair-weather friend to Hue and Cry, but I really loved their music and bought loads of their records until the early nineties when my interest faded, probably due to the band’s passion for pop also fading, as they left record label Circa and when a bit ‘jazz’ for a while.

I was wondering how my lack of knowledge of much of their music for the past 20 years was going to play out, but they judged the evening perfectly with a 90-minute set of hits, fan favourites and some well-picked covers, including Luther Vandross’ Never Too Much, Smokey Robinson and the Miracles’ The Tracks of My Tears and my personal favourite, a fine rendition of David Bowie’s Win (extra brownie points for picking a (relative) ‘deep cut’ from Young Americans). I’d seen the video of them doing this track online and at the time I thought it was a tad sterile, but it was moving and brilliant on this cold Islington night.

I’ve seen a few acts in the last six months or so at the same venue ­– including Suzanne Vega and Howard Jones – do the ‘stripped back’ approach (presumably an economic necessity, for the most part) and the pattern is often the same. I go in to the gig in question rather wishing there was a full band (call me old fashioned, but I like drums and bass etc.) but come out delighted with the performance and in the end, without missing the bigger band at all.

And so it was with Hue and Cry. I didn’t mourn full arrangements. This is partly down to Pat Kane’s incredibly beautiful singing voice – an under appreciated instrument that really does need little accompaniment – and the familiarity and strength of the songs. It was straight down to business with a confident Looking for Linda (with Greg on guitar) and not long after their first major label single, the sprightly I Refuse – a great song that ‘refused’ to be a hit (twice).

They played one or two from their most recent album (Sinatra tribute September Songs), but sensibly focused on the early period in their career and the records people remember the most, including almost all the singles from the first two albums Seduced and Abandoned and Remote (reissued in 2014). I’m guessing that, like some of their contemporaries, there may have been a period in the mid-to-late nineties where the Hue and Cry might have felt constrained and defined by those ‘popular songs’ that were hits back in the late 1980s, but things come full circle and now those songs serve them well, providing highlights and anchor points in their live set and drawing crowds big enough to make a living.

There was some good-humoured brotherly banter on stage throughout, and Pat has clearly mellowed over the years, something he acknowledged when he laughingly described himself as a “Marxist/feminist” back in the early days.

The evening ended with a few requests and thankfully someone had the sense to suggest Violently, a superb single that I’d completely forgotten about. A personal favourite Wide Screen (Labour of Love B-side) went unplayed but that was the only disappointment of an otherwise superb evening.

Hue and Cry will play a full band show at Paisley Town Hall on 26 March 2016.