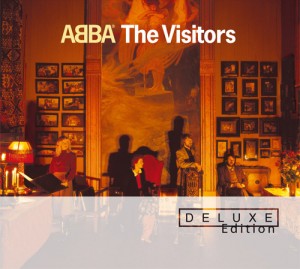 ABBA’s Deluxe Series reaches its natural conclusion on 23 April, when their final studio album, The Visitors, is released as a  expanded CD+DVD edition.

As with previous deluxe releases, the DVD element will contain appropriate archive material, but the real surprise with this reissue, is that alongside the usual – and now quite familiar – audio bonus tracks, is a completely unreleased ‘demo medley’ called From A Twinkling Star To A Passing Angel. This represents the first previously unreleased ABBA recordings to surface since the Thank You For The Music box set in 1994!

The Visitors was originally released in 1981, and was actually the very first CD ever pressed at the Phillips factory, near Hanover, Germany.

After some mixed reviews for the audio on earlier deluxe editions, the Super Trouper issue from last year was widely praised for the excellent remastering. Let’s hope we get more of the same with The Visitors.