If you enjoyed Earth Recordings’ (now sold out) Bagpuss reissue, then here’s another opportunity to relive your childhood in front of the TV because Trunk Records are reissuing ‘The Original Television Soundtrack’ of Clangers, the classic British stop-motion children’s television series that was originally broadcast between 1969 and 1972.

Like Bagpuss (which came later), Clangers was the brainchild of Oliver Postgate. He wrote, animated and narrated the programmes with models made by his partner in the Smallfilms company, Peter Firmin.

This Trunk Records vinyl LP has been out-of-print since 2001 (it was originally issued on cat number SOUP 001 and got a five-star review in the NME) and has just been repressed. It features the music from all 26 episodes of Clangers – pastoral space music at its very best!

The music was ‘translated’ from Oliver Postgate’s graphical sketches which were literally drawn on the scripts by regular musical collaborator Vernon Elliott and was recorded in a village hall in Kent!

The vinyl record features series one on side one and series two on the second side. Johnny Trunk’s notes are on the vinyl sleeve.

This is available now and can be ordered from the SDE shop for immediate despatch using this link or the button below. 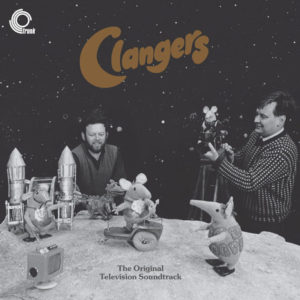 1: Episode One – Intro Music and Dialogue.
Lids.
Dialogue.
Xylophone: Here Tiny Clanger And Small Clanger fight over a piece of rope.
F1: Major Clanger’s new flying machine, that does not fly.
N4A: Poor Major Clanger, another flying disaster.
1.2.3: Go and get some soup…
G5: …and bring it back to Major Clanger.
K: Tiny Clanger and Small Clanger floating up and down with their new flying machine – a balloon.
G6: Let’s get Tiny back down.

3: From “Visiting Friends”
R4: Tiny Clanger makes a helicopter out of music notes and flies to the Iron Chicken for a cup of
tea and a chat.

4: G2: Clangers running up and down. How can they rescue Tiny Clanger?

8: From “Goods”.
W1: The plastic goods making machine goes out of control.

1: From “The Rock Collector”
An astronaut lands. Although The Clangers are friendly to him he is scared and runs around the planet, ending up getting covered in soup. And then floating in orbit.
Cues 2A, 2B, 2C, 2D.

2: From “Glowhoney”
Tiny Clanger wants to know how Glowbuzzers make Glowhoney. He follows them into their cave full of singing flowers, and gets lost. Only the Glowbuzzers and the wool from Granny Clanger’s knitting get him out.
Cues 3A, 3B

4: From “Cloud”
The lonely cloud is invited to Mother Clanger’s party, He disappears into the Froglet’s magic hat.
Cues 5C, 5E, 5E (faster).

5: From “The Seed”.
A seed floats over the planet and lands. It grows quickly and invades the whole planet. Fear
spreads throughout the Clanger community.
Cues: 8A, 8B, 8C, 8D, 8E.

6. From “The Bags”
A magical singing Gladstone bag is on the planet. It causes all sorts of trouble. But the Clangers
find him a lady bag, and they fly off together, handle in handle and very much in love.
Cues: 10A, 10B, 10C, 10D.

9. From “Music Of The Spheres”
The final episode. Tiny Clanger plays his pipe organ and is accompanied by all the musical heavenly
bodies.