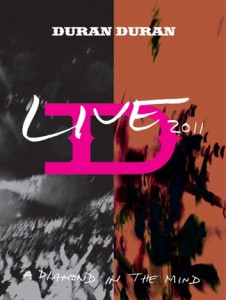 Duran Duran are set to release a live DVD, Blu-ray and CD to commemorate their successful All You Need Is Now tour.

Out on 2 July 2012 through Eagle Vision and Eagle Records, A Diamond In The Mind was filmed and recorded at Manchester’s MEN Arena in December of last year, where the band garnered some of the finest reviews of their career.

Tracks from All You Need Is Now feature heavily in the set list (eight in total) but there was more than enough time for the band to play a host of classics including The Reflex, Planet Earth and Ordinary World. The concert was shot in high definition and will be simultaneously released on multiple formats:

Simon Le Bon said; “The 2011 UK tour was particularly significant for all of us on a number of levels. In the early part of the year, I lost my voice and we were forced to cancel several months of touring, including all of our British dates. It was a really difficult time for us as a band as we had a new album out that we were just breaking in and loving playing live. When I blew my voice out in Cannes, at the film festival in mid-May, we weren’t sure when we would be able to resume and the summer wait was long and full of anxiety – especially for me. The UK shows which were finally rescheduled for December, proved to be some of the best we’ve ever done – so the year that had been rather a roller-coaster, ended on a really high note.”

Track listing for the Live CD:

‘Laughing Boy’ is from the deluxe CD