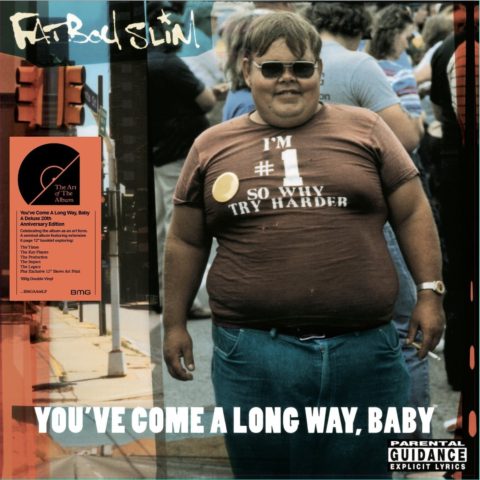 BMG will issue a 20th anniversary edition of Fatboy Slim‘s 1998 album You’ve Come A Long Way Baby as in March.

The album was a big success when it was released (reaching number one) and delivered four UK top ten hits: The Rockafeller Skank, Gangster Tripping, Praise You, and Right Here, Right Now.

Unlike the two-CD 10th anniversary edition of 2008, and even though these are being described as ‘deluxe’ editions, this reissues delivers no bonus audio at all, with BMG repackaging it as one of their ‘art of the album’ reissues with new sleeve notes (by Ralph Moore).

It will be available as a single casebound book CD edition, a 2LP vinyl package (which includes a six-page 12-inch booklet and an art card of the album cover) and a special ‘meal deal’ combo set which includes the CD, the 2LP vinyl and an XXL T-shirt in a pizza-style box set. The latter is exclusive to the Official Fatboy Slim Shop (as is the standard CD right now).

There’s no mention at all about remastering (not that it really needs it) and to be honest it’s all rather underwhelming; having a T-shirt in a pizza box that is probably not going to fit you (“in authentic Fatboy XXL size”) just about says it all, really.

You’ve Come A Long Way Baby will be reissued as a 20th anniversary edition on 16 March 2018.

A1. Right Here Right Now
A2. Rockafeller Skank
A3. Fucking in Heaven

B1. Gangster Trippin
B2. Build It Up, Tear It Down
B3. Kalifornia