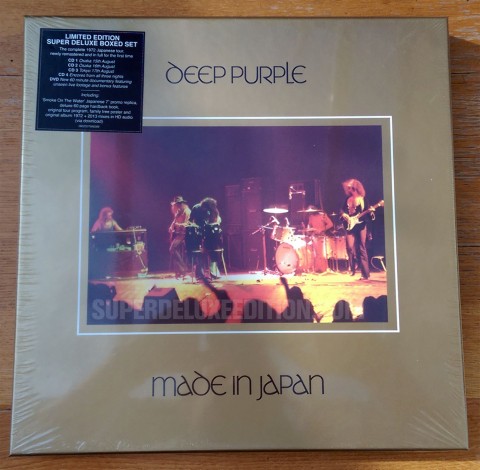 Released on Monday 19 May is this five-disc Super Deluxe Edition box set version of Deep Purple‘s 1972 album Made In Japan.

Three CDs contains the full show from each night (newly remixed) with a fourth collecting together all the encores. A DVD with 60-minute documentary and unseen live footage is also included.

The optical discs are housed within the inside front and rear covers of a very glossy 60-page hardcover book, which has a very readable essay from Malcolm Dome, some notes on the remixing from Martin Pullan and plenty of quotes from famous people falling over themselves to say how inspirational Made In Japan was for them. The usual crew, Slash, Bruce Dickinson, and ex-F1 driver Martin Brundle…!?

A heavyweight seven-inch single is a replica of a Japanese promo and the inclusion of a replica Japanese Tour Programme from the time is a very nice touch. Unlike the Rush vinyl box this has an excellent Pete Frame ‘Family Tree’. Although we couldn’t find his name on it (!?) it’s clearly his work.

This box doesn’t come with a physical hi-res version of Made In Japan, but like the McCartney deluxe editions prefers to offer this via download. The included code gets you a remastered hi-res stereo of the original mix, as well as a hi-res stereo version of the 2013 remix. In both cases you get the original running order of the standard album, not all three nights.

Made In Japan is also available as a 9LP box set, a 2CD deluxe edition, a 2LP vinyl, a standard remastered CD and a Pure Audio blu-ray audio (which does provide a physical version of the two hi-res versions mentioned above).

Scroll down to view all the photos. 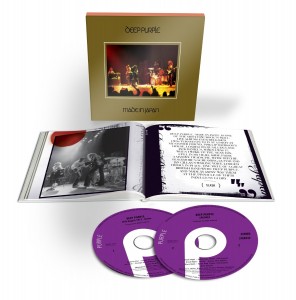