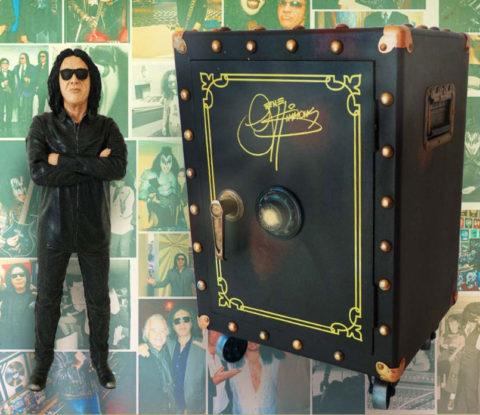 “This is my personal invitation. Welcome to The Vault.”

Next time you hesitate over the value of that four-disc box set that some record company has the cheek to charge you $50 for, reflect on Gene Simmons‘ new 10CD package called The Vault that costs up to $50,000!

The KISS co-founder says “I’ve created a 50-year time capsule (1966 to 2016) that serves as a soundtrack to my life, filled with songs I’ve written, but have never been released. Until now. The Vault includes 150 recordings featuring notable rock and roll artists and of course, my bandmates from KISS.”

Here’s a tweet with the man himself explaining how it works:

THE GENE SIMMONS VAULT EXPERIENCE is here! Visit https://t.co/qVhsVFyZCh for all the details. pic.twitter.com/BHzL8gq3YQ

The packaging is an actual safe that weighs 38 pounds. As well as the ten CDs, you get some “exclusive mementos” such as a new Gene action figure, an “oversized commemorative coin” (naturally), a deluxe book with over 50,000 words and 160 pages of unseen photos and track-by-track commentary on every song. Additionally, Gene will ‘hand select’ a personal gift “from me to you” direct from his archive.

$2,000 gets you the ‘Vault Experience‘ which is a meet and greet in your area to spend “one on one time” with Gene and get photos, autographs etc.

For $25,000 you can upgrade to the ‘Producer Experience‘ where you and a guest will spend an “intimate hour” with Gene in a recording studio listening to tracks from The Vault. Your name also appears as ‘executive producer’ on The Vault and you are guaranteed low-numbered edition (1-500).

If the Producer Experience seems a bit ‘meh’, then why not cough up $50,000 for the ‘Home Experience’? With this, Gene comes to your house and you and up to 25 guests will spend two hours with Gene and you get a “Songs & Stories” playback session and Q&A in your home! If you can’t imagine what that would be like, the image below might help.

The Home Experience: “Dad, please ask this man to leave…”

Gene appeared on US TV’s Today Show yesterday, which gave him time for a shameless plug. This at least gives you an idea of the size and scale of the set.

The Vault is only available from Gene’s website. Head over to GeneSimmonsVault.com for more.