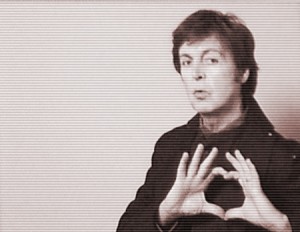 Paul McCartney finally gets his Hollywood Walk Of Fame Star this Thursday, only 41 years after winning an Oscar as a member of The Beatles, for best score for the Let It Be film.

None of The Beatles attended what was the 43rd Academy Awards in 1971, so the honours were left to Paul’s friend Quincy Jones to collect it on behalf of the disbanded group. This was more complicated than it might sound, as Jones was conducting the orchestra that evening, as he explains in the clip below!

McCartney was nominated again in 1974 for Live and Let Die and in 2002 for Vanilla Sky, but Let It Be remains his only Oscar win. Surprisingly, Sir Paul is the last of the Fab Four to collect a solo Hollywood Star.

He has a busy week ahead, as he also performs at the Grammy Awards this Sunday and has just released his new ‘standards’ album Kisses On The Bottom (review of Deluxe Edition coming soon).

Watch Quincy Jones talk about the Oscar and the clip of him collecting it.