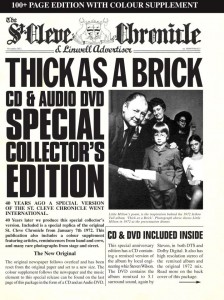 EMI, Ian Anderson, and Steve Wilson have acknowledged that there are three glitches on the 5.1 surround sound DVD that comes as part of the Jethro Tull’s Thick As A Brick 40th Anniversary Deluxe Reissue. This message was recently left on the Jethro Tull Facebook page:

We have been alerted to the fact that there are three small audio glitches on the 5.1 streams on the DVD part of the Thick As A Brick Special Edition CD/DVD set. We are working to resolve this issue as quickly as possible. Any new stock going into stores will be amended & for fans who’ve already purchased the set we will be making available a replacement DVD disc for you. More information to follow shortly. This occurred in the very final stage of mastering prior to manufacture of the commercial run of product and was not noticed until attentive early purchasers spotted the digital errors. With our apologies.

More on this when we have it.