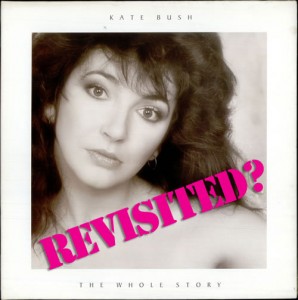 Rumours abound that Kate Bush will release a 22-track expanded hits collection this November, possibly called Revisiting The Whole Story. The title is a reference to her one and only greatest hits compilation The Whole Story, a 12-track affair released in 1986 after her success with Hounds Of Love.

Release schedule website Pause&Play had the listing up for a short while yesterday, although it has since disappeared. They were detailing a 22-track two-CD release, and a special limited-edition version with a bonus DVD including 35 videos. A single was even mentioned – Running Up That Hill 2012.

Should these rumours prove to be factually correct, fans have much to be excited about. None of Kate’s videos have been released on DVD. The Whole Story video collection did get a brief expanded laser disc release in the early 1990s but a decent digital offering is long overdue.

Even more intriguing is Running Up That Hill 2012. This obviously suggests an update to the 1985 single that re-established Bush on the world stage as a unique and commercial talent. She is certainly not afraid to make changes to songs that are considered ‘classics’. On the original Whole Story collection she re-recorded the vocal to her debut single Wuthering Heights, effectively creating Wuthering Heights ’86, although it was not dubbed as such. One possibility is that Running Up That Hill was tackled as part of the Director’s Cut project from 2011, and has been held back for the purposes of promoting this hits collection. If that is the case we can expect a complete re-recording of drums and vocals and other instrumentation removing much of the ’80s’ production from the familiar studio version.

Kate has released 15 singles since The Whole Story, including her duet with Peter Gabriel (Don’t Give Up), the cover of Elton John’s Rocket Man and The Man I Love with Larry Adler. It is likely that most of the selections from the 1986 compilation would remain, but the running order will probably be resequenced across two CDs along with singles from her later albums.

If we do see this collection in November, Kate will have sealed her newly earned reputation as the busiest recluse in music, with three albums released in two years, following Director’s Cut and the acclaimed 50 Words For Snow from 2011.

Do you know anything about this release? If so, please let us know by leaving a comment.