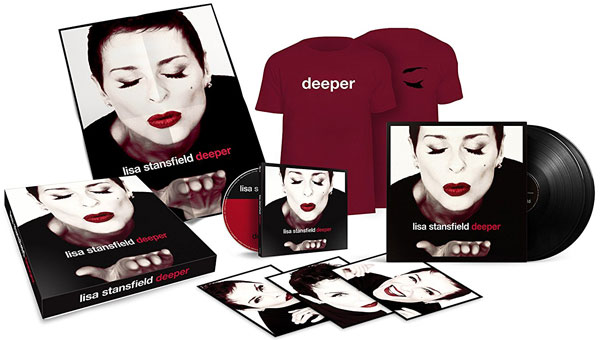 Lisa Stansfield‘s eighth studio album Deeper will be released in April and a deluxe box set edition is part of the physical offering.

Deeper has been mainly written by Stansfield and Ian Devaney and produced by Devaney and Snowboy (Mark Cotgrove).

The 13-track album is being issued as a double vinyl set and a digi-pak CD edition. There is no deluxe version with bonus tracks.

EarMusic were rather coy about revealing any box set details when the album was officially announced – they didn’t mention it at all! Perhaps that’s because it’s very disappointing. One of those where it just gathers everything together; so you get the 2LP vinyl, the CD, an A2 poster, a T-shirt (size L) and three A4 ‘photo cards’. So no coloured vinyl, no picture disc, no exclusive audio, no bonus video footage. Pretty uninspiring stuff. Let’s hope the album is better than the physical presentation.

Edsel are reissuing all the Arista albums of British singer-songwriter Lisa Stansfield this October. Each…