Paul McCartney has emailed his ‘biggest’ Spotify fans to offer those who use the streaming platform an exclusive physical product.

In an email with the subject line “Sir Paul McCartney made you something” the message is as follows:

“Thanks for being a fan

Sir Paul McCartney has pressed an exclusive green double disc vinyl of his upcoming album Egypt Station, to be released on September 7, only for his biggest fans on Spotify — you!

Offer ends September 1 or while supplies last. This is a very limited edition, only available through this email, so grab yours before it’s gone!” 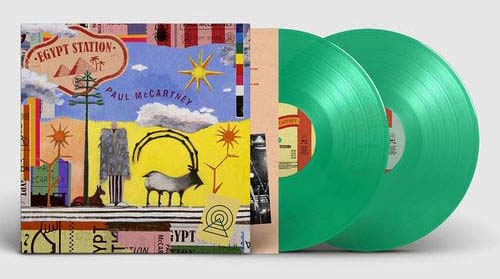 I probably don’t need to point out the irony, but will anyway. Paul McCartney (and his team) adamantly refused to give fans who wanted – and were paying for – physical product, a CD of rare audio when he issued about an hour’s worth of ‘download-only’ content as part of his £130 Flowers in the Dirt box set (see this post). Now, fans who primarily use streaming are being offered something exclusive in the physical domain (the email contains the hashtag ‘SpotifyFansFirst’). You really couldn’t make it up.

Apart from the colour, this green double vinyl looks the same package as the red vinyl which is exclusive to Barnes and Noble in the USA.

The new album Egypt Station is out on 7 September.