Paul McCartney fans have been made to wait a long time for the next album in his sloth-like ‘Archive Collection’ reissue campaign, but amazon.co.uk are now listing Ram (1971) as due for release on 29 May 2012.

Although Amazon release dates should be treated with caution, this is approximately when the next reissue was expected, once it was clear that Kisses On The Bottom was to be released in February 2012.

Ram (2012) is listed twice, once as a three disc deluxe edition

at £37.99. Both sets are marked as ‘imports’ which is why the second price in particular is rather nonsensical. Once the reissue details are confirmed, we can expect a 3-disc deluxe edition with the now-familiar linen-bound book to retail for around the £60 mark, while a 2-disc digi-pack should be about £12. The simple 1-disc version is likely to cost £8. A mock-up of how the deluxe edition might look can be seen above.

If the deluxe edition is indeed three discs, then we can take an educated guess as to the likely content:

All the reissues so far have included a DVD, and it seems unlikely that Ram will break the mould in this instance. If this is the case we could see the deluxe edition contradicting the amazon listing and appearing as a 4-disc package with a DVD of unseen home movie footage and other associated videos/interviews.

There are also rumours that the Ram deluxe will offer something special beyond the 128 page book, but we will have to wait until we get official confirmation on that score. On 5 March, Paul’s label Concord Music Group tweeted the following answer to a fans enquiry about the next reissue:

“You’ll find out soon. We’ll make an announcement within a few weeks re: the next one but you won’t be disappointed ;-)”

***Update 20 March: The Direct Current music blog is reporting that Ram will be released as a limited edition mono vinyl edition, in addition to a 1CD, 2CD, 2xLP (stereo) and 3CD+DVD Deluxe Book Edition. ***

So far we have had three reissues from the campaign: Band On The Run in October 2010 and McCartney and McCartney II in June 2011. 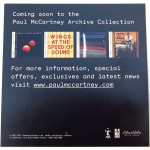 The Wings albums Venus and Mars, Wings At The Speed Of Sound and Wings Over America have been promoted as ‘coming soon’ since the end of 2010. It remains to be seen when we will see any of those reissues.

Paul has yet to reissue an album solely credited to Wings so far in this campaign, with Band On The Run correctly issued as “Paul McCartney and Wings”, and his two solo albums obviously released under his own name. Ram has always been by “Paul and Linda McCartney”.