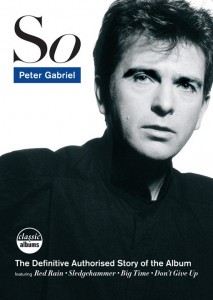 While we wait for more details on the forthcoming Peter Gabriel So reissues (triple CD and Super Deluxe Edition is what we know so far) Eagle Rock Entertainment have announced that they are to release Peter Gabriel – Classic Albums: So on Blu-ray (and DVD). This release tells the story behind the making of Peter Gabriel’s 1986 album So, and is released on the same day as the album reissues, 18 September 2012.

The Classic Albums series are made with the full authorization and co-operation of the artists, and Classic Albums: So offers contributions from many of those involved in the making of the album and the landmark videos. Those featured include Peter Gabriel himself, co-producer Daniel Lanois, engineer Kevin Killen and musicians Jerry Marotta, Laurie Anderson, Tony Levin and Manu Katché and many more.

Although it has already been broadcast on UK TV, Classic Albums: So contains over 30 minutes of additional material not included in the broadcast version as bonus features.

Because this is getting a separate release, we can safely conclude that it will not feature as part of any of the Real World/EMI reissue packages in September.

The Blu-ray appears not to be listed on amazon as yet, but you can pre-order the DVD here