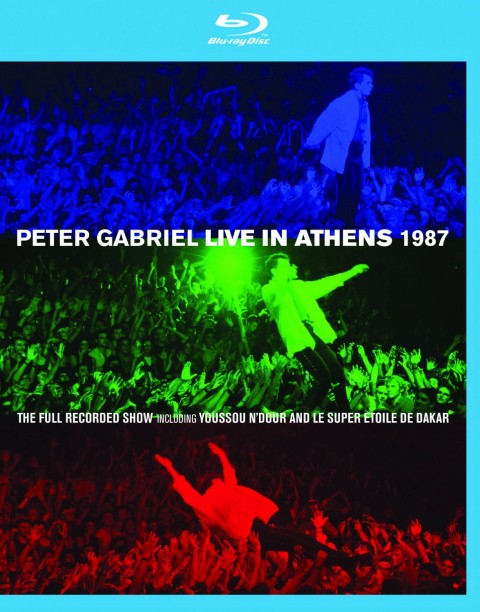 Eleven months ago we robustly criticised Peter Gabriel‘s overpriced and under-spec’d So 25th anniversary box set. Like many fans, we could not understand why Gabriel would completely ignore B-sides and remixes, and not offer the album in surround sound.

One of the issues that perplexed us the most, was having gone to the trouble of restoring and re-editing the 1987 Live In Athens / POV concert film, it was included within the box only as a DVD and not a blu-ray disc. Fans would end up having to buy it again, because – as we pointed out at the time – “Live In Athens will inevitably get a Blu-ray reissue”. Not so, according to Peter Gabriel who personally responded to the open letter posted on this blog. He admitted he and his team ‘got this wrong’ by only including a DVD, but rejected our suggestion of a cynical marketing ploy to make people buy the same content twice – “There are no plans at present for a standalone version” he said.

I’m sure he meant that when he said it, but it seemed almost unthinkable that Live In Athens wouldn’t be issued on Blu-ray at some point. So we can announce the at with crushing predictability, Eagle Vision have put a Live In Athens blu-ray on the schedule, with a release date slated for the 16 September 2013, less than a year after fans paid £100 for a ‘deluxe’ box set containing the same concert on DVD.

Gabriel himself said in his letter that “if there is real demand for it in the future, we will try to make sure that it has enough different elements for anyone who buys the box set”. Well, they have not done that. A close look at the spec for the blu-ray release reveals that Eagle Vision are simply bundling a DVD of Play – Peter Gabriel’s 2004 video collection – in with this release. Anyone seeking out this blu-ray surely has a high chance of owning the nine year old video compilation already.

So what to make of all this? There is no doubt that by coming out and explicitly stating there are ‘no plans’ to release the Athens film as a standalone release, Peter Gabriel was  encouraging fans to buy the So deluxe box set, to get this content. To then do exactly what he announced they were not going to do, with the box less than a year old, seems rather exploitative.

We suggest that any Peter Gabriel fan who would like to upgrade their DVD copy of Live In Athens, and who can provide proof of purchase of a So deluxe box, should – on request – be supplied with a single Live In Athens Blu-ray disc FREE OF CHARGE to slot into their So deluxe box set. Gabriel himself admitted it was a mistake to not include the concert in the box set on blu-ray, but he – and Eagle Vision – are set to profit from this mistake. Fans need to shell out a further £16 on top of the £100 they may have already spent, to get a premium version of the concert film.

In fact, we feel so strongly about this, we’ve set up a facebook campaign, to encourage Peter and his team to do the right thing. Please visit the facebook page and support this campaign.

So come on, Peter, RealWorld, EMI, Eagle Vision – do the right thing and offer fans the free ‘upgrade’. Give them what they should have had when the paid for the box set – Live In Athens in stunning high definition blu-ray quality.

If you are a Peter Gabriel fan who bought the So deluxe box set, we’d love to know your feelings on this subject – leave a comment and let us know.