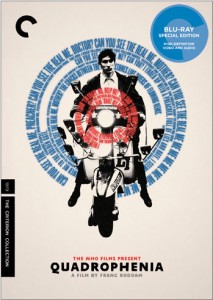 The 1979 film Quadrophenia, based of course on The Who’s classic rock opera, gets a director-approved Blu-ray release in the US on 28 August from movie connoisseurs The Criterion Collection.

The Blu-ray features a new high-definition digital restoration of the uncut version of the film, an all-new 5.1 surround mix, supervised by The Who (presented in DTS-HD Master Audio), and the original 2.0 stereo track (for the purists).

Other features of the Blu-ray are:

This new Blu-ray reissue (a DVD version will also be available) can be pre-ordered from The Criterion Collection website. Please note that discs may be region-limited to the US.