Fans won’t miss the irony. Pink Floyd‘s The Wall  is an album that deals with isolation and alienation and was famously performed live in 1980 with a physical division (a literal wall) being built between audience and band.

The Wall, as performed live by Roger Waters between 2010 and 2013 is being released on audio and video formats, but yesterday a super deluxe edition was announced that is so expensive that it really does divide the Us and Them. The barriers have come up again and while Waters isn’t literally spitting at his audience anymore, perhaps in this inflated, grotesque and overblown package fans might find a kernel of the same disdain.

To put that in perspective Waters thinks him performing his old band’s album live has the same worth as every note Bob Dylan recorded in 1965 and 1966.

There are some exclusive elements here such as “a new documentary about the making of the tour” and “The Simple Facts – A Conversation with Nick Mason and Roger Waters” on blu-ray although “only available in this package, the brand new score by Roger Waters, and the full live soundtrack” is a confusing statement that hints as something unique, without actually explaining it. 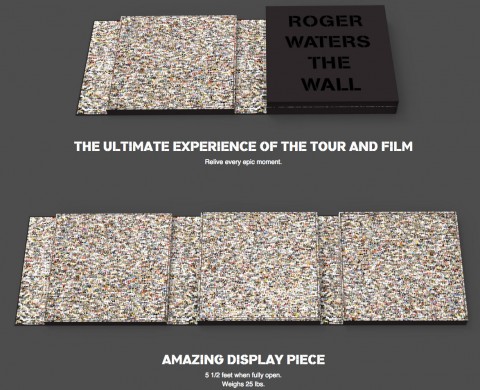 But let’s be clear, you can buy the special edition two-disc blu-ray, the 3LP vinyl set and the two CD edition separately for $82. So the premium of $418 buys you the book and some fancy packaging (“Hand applied graphics. Each set is unique”). In perhaps the most ridiculous piece of music marketing ever, the official site boasts that this set is “5 1/2 feet when fully open” and “weighs 25 Ibs”. Whoopee Doo. When you have to start boasting about size and girth you know you’re in trouble.

The good news is that those who’ve already pre-ordered some of the individual sets won’t have to cancel to pre-order the super deluxe because it’s a ridiculous proposition. Preposterous.

Let’s face it it’s not even the real deal. Yes, Waters wrote most of it, but he didn’t perform it originally, Pink Floyd did. So a $500 price-tag for a live covers album? I don’t think so.

You can read more about the super deluxe edition of Roger Waters The Wall here (and pre-order if you should so wish). It will ship in January.