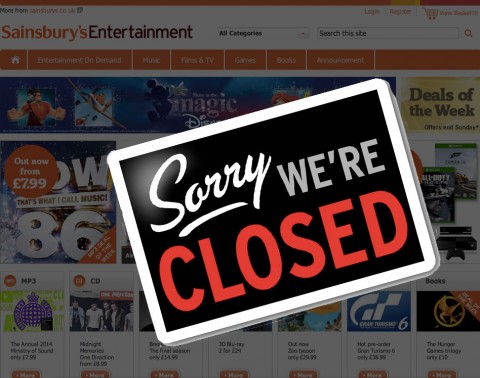 Sainsbury’s Entertainment have announced that they are to stop selling physical music product online.

In a statement the supermarket chain said:

“Due to the rise in demand for downloading and streaming films and music, from March 2014 Sainsbury’s Entertainment will become a completely entertainment on demand site. From 28 February 2014 we will no longer accept online orders for physical products.”

For music box sets and deluxe reissues, the UK retail giant had a clear online strategy in place to squeeze their margins, allowing them to compete with Amazon on price. This was evident quite recently when their website offered each of Edsel’s Bananarama 2CD+DVD sets for a highly competitive £9.99 –  initially £3 cheaper than Amazon in the UK. Recent sets from The Beach Boys, The Band and The Who were also very competitive.

Anecdotal evidence from comments left on this blog suggests that the supermarket chain were succeeding in attracting customers away from Amazon, but with margins so low, high volume was always going to be essential, and perhaps the figures were simply not stacking up.

The news will certainly come as a blow to UK music fans (Sainsbury’s didn’t ship overseas) as Amazon’s already firm grip on the music market tightens even further.

What are your thoughts on this development? Leave a comment and let us know.