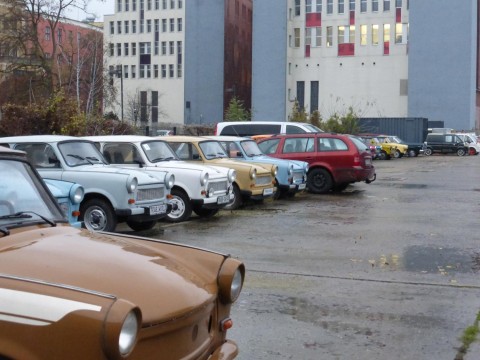 There are many cool things about Berlin, but the fact that David Bowie moved here in 1977 and recorded so much great music in the city – including the whole of his Heroes album – is what, from a music fan’s point of view, makes the place so special.

So I was always going to want to take a look at Hansa Studios, or Hansa Tonstudio (Hansa sound studio) the place where Bowie recorded and by doing so, inspired other musicians (Depeche Mode, U2 and R.E.M. et al) to record in Berlin. 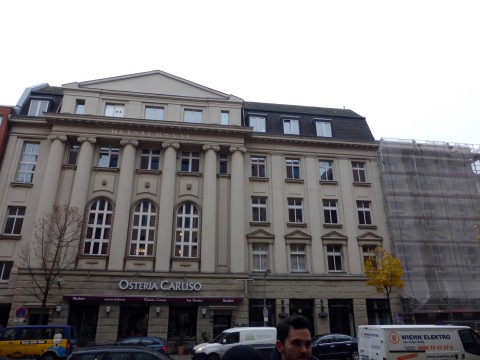 The outside of the Meistersaal. The three big arched windows indicate the room where Bowie re-corded

Cue Thilo Schmied (his first name is pronounced tee-lo) who runs a Berlin Music Tours. He operates a few different tours but the jewel in the crown is the Hansa Tonstudio tour which caters for the enquiring minds of fans like myself who have spent a lifetime listening to the music and know most of the stories but have never seen the place and have thus far only ever really imagined how it might look.

These are group tours and they last about two hours. Thilo starts by meeting everyone at the location (quite near Potsdamer Platz) across the road from what is called the Meistersaal building, and explains the history of the bricks and mortar and how the studios came to exist in what is a concert hall built in 1910 (I was ignorant of all of this). He supports his points with a collection of fascinating photos from various eras which show the state the building was in at different points in time, including when, rather disconcertingly, there was nothing either side of it (the current buildings either side were built in the 1980s). 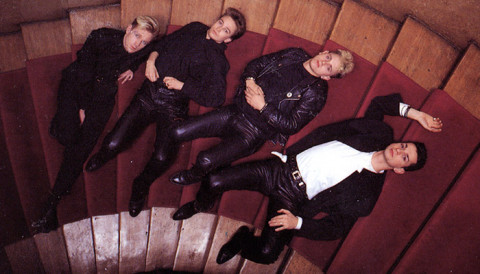 It was noticeably colder today in Berlin, so after about 20 minutes or so I was pleased when we headed inside and we walked up the staircase to what was Studio 2 of Hansa Tonstudio. Thilo chuckled that Depeche Mode fans often hit the floor and lie down on the staircase, replicating a famous photo taken of them in the early 1980s. Apparently if you’re a fan of the Mode, it’s the equivalent of walking across the Zebra Crossing at Abbey Road for Beatles fans! 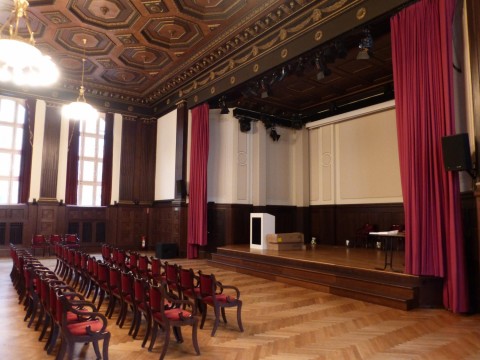 The hall itself is massive and it just feels and looks like a concert hall. There is nothing to indicate its past as Studio 2. Thilo went into great detail about how things worked and pointed out the obvious problem that – since it was never designed from the ground up as a recording studio, it was missing an important element – a control room as part of the room furniture. A space upstairs was used as the control room and producers and musicians had to communicate with primitive video screens and video cameras. Thilo is an enthusiastic guy and clearly enjoys his job, informing and debunking a few myths at the same time. He had many more photos, particularly of David Bowie in Studio 2, recording Heroes. It was quite eerie (and cool) when you saw a photo you knew, while being in the room where it was taken, with Thilo making sure people understood who was positioned where (“Brian Eno was standing where you are now”). We then moved up to the area now which is a bar, but back in the day was the recording booth! After giving people time to take photos, we then moved up to the area which was the control room, now which is a bar area. 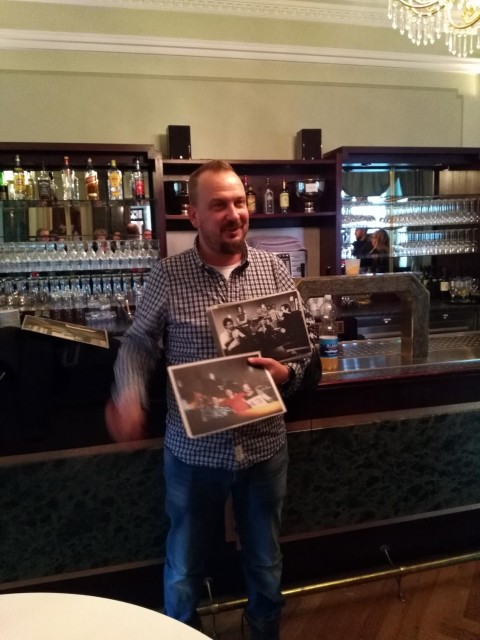 Thilo in the bar area which was the control room of Studio 2, which is where the photo he is holding was taken.

The final part of the studio tour allows fans to explore studio one on the top floor, which is still an active studio today. Depeche Mode recorded three of there albums in this studio, including Black Celebration. After looking around the studio and hearing about recording techniques from Thilo, we were then all guided into the control room where there is still a massive SSL mixing desk and he demonstrated how the ’sound of the room’ (meaning the Meistersaal hall) had an effect on various records, like U2’s One, the title track of Depeche Mode’s Black Celebration and of course Heroes. No photos were allowed in so I can’t show you any pictures! 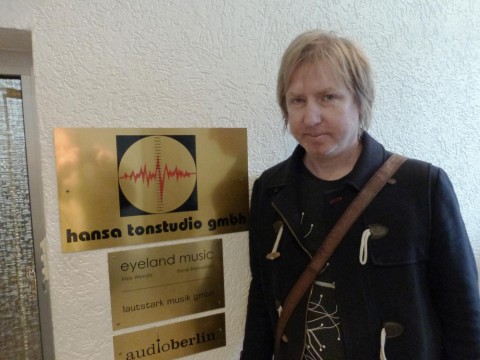 The tour was supposed to last for about two hours, but ended up being about two-and-a-half hours. Bus tours are and walking tours are also available and they can be configured for Bowie, Depeche Mode, or U2.

If you like your music (clearly if you’re an SDE reader, you do) then I’d say the Hansa Tonstudio tour is essential if you visit Berlin.

I haven’t mentioned that my mate Allan had turned up in Berlin late on Friday to join me for the remainder of the weekend, and perhaps inevitably, we were both suffering from quite bad hangovers on Saturday… So for the second half of the afternoon we went for a walk for a blast of fresh air and a Bratwurst, both of which eased the symptoms! We wandered to Checkpoint Charlie, but the weather was foul, absolutely tipping it down. Allan tried some social commentary with this picture below. 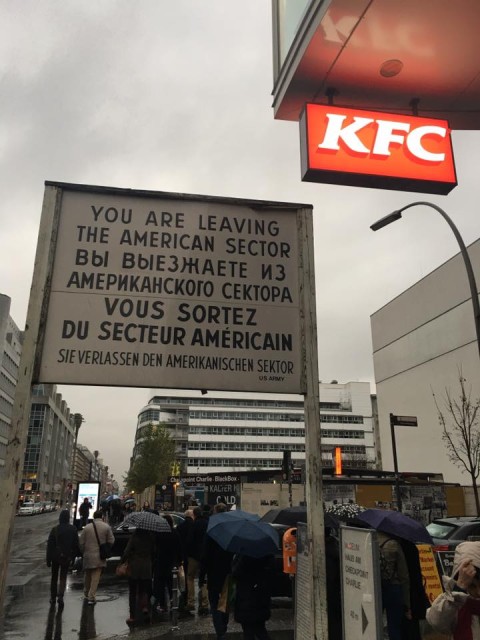 Anyway, it was back to the hotel for obligatory pre-dinner 40 winks because, rather fortuitously, The Human League were in town and guess who had (blagged) tickets?

On the way we stopped off for dinner at Felix Austria a fantastic restaurant that Mark Reeder had recommended to me on Friday night (more on my meeting with Mark coming to SDE soon). Allan and I had had an awful meal on Friday, so I asked Mark to suggest an authentic German/Austrian place (he has lived in Berlin since 1978). Anyway, it was amazing. Fantastic ghoulash and a great wiener schnitzel (just don’t ask for ‘large’). 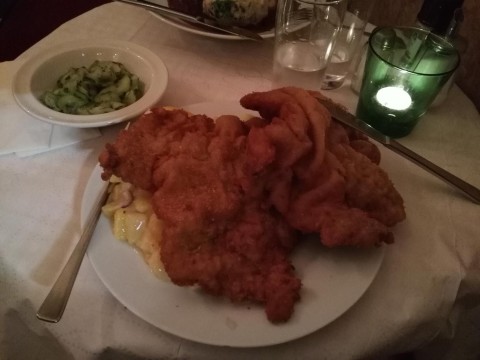 The ‘large’ wiener schnitzel at Felix Austria. There’s a massive potato salad underneath!

Coincidentally, the restaurant was fairly near the venue –  Huxley’s Neue Welt – so we walked it. Mark had said he was going to the gig too, since a band he’d championed, Ekkoes, were the support. 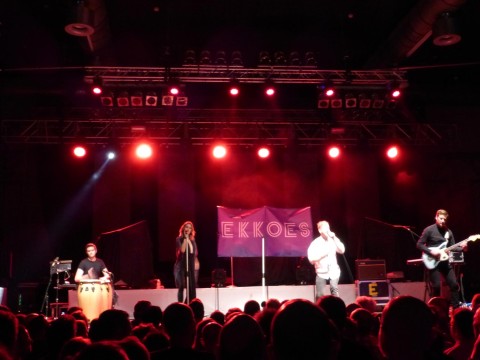 The Human League were fantastic, with loads of costume changes. Phil Oakey is in great shape (and voice) and came on looking a bit like Morpheus from The Matrix and at the end resembled Thomas Jerome Newton from The Man Who Fell to Earth.

No record shopping today, but a very memorable day in Berlin. Thanks for joining me. 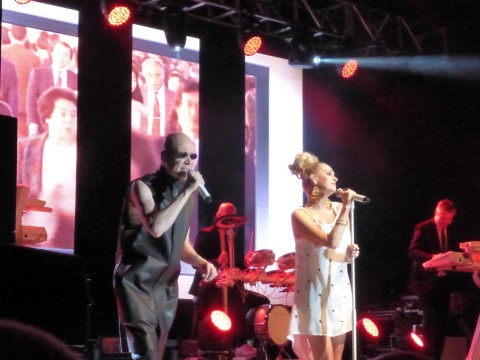 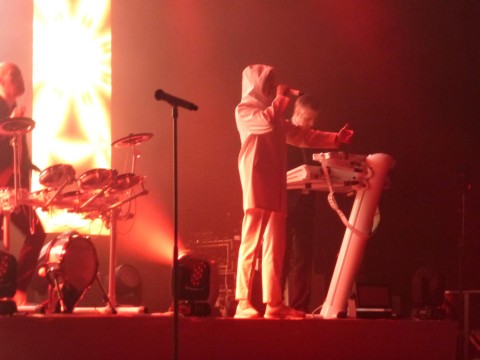