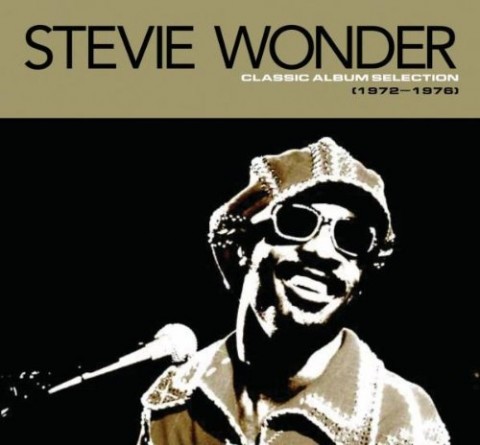 The word ‘classic’ tends to be used rather loosely when record labels market ‘classic album selection’ box sets. Often these collections might feature one or two mildly successful records, padded out with less notable fair. Regularly the ‘blockbuster’ album is missing altogether.

Praise be then, for a set that truly lives up to the billing. This box has been previously available in some territories, but on 28 October 2013 Universal Music will issue a Stevie Wonder Classic Album Selection in the UK that contains a phenomenal run of albums that are rightfully regarded as some of the best records ever made. Within this set is Talking Book (1972), Innervisions (1973), Fulfillingness’ First Finale (1974) and the double album Songs In The Key Of Life (1976).

In the unlikely event you are not too familiar with these records, a list of some of the hit singles pulled from them might provide evidence of their excellence:  Superstition, You Are The Sunshine Of My Life, Higher Ground, Living For The City, He’s Misstra Know It All, You Haven’t Done Nothin’, Isn’t She Lovely, and Sir Duke.

These singles are just the tip of a creative iceberg that sunk the concept of ‘little Stevie Wonder’ trapped in the familiar Motown sound, and allowed the true artist to emerge to make this series of career defining albums. The songs on these records manage to be both political and personal; poppy and soulful; experimental and commercial, and feature a musician, singer and songwriter at the very height of his powers, often playing all the instruments himself (including the drums).

Unless you own all of these records, Stevie Wonder Classic Album Selection is an essential purchase.