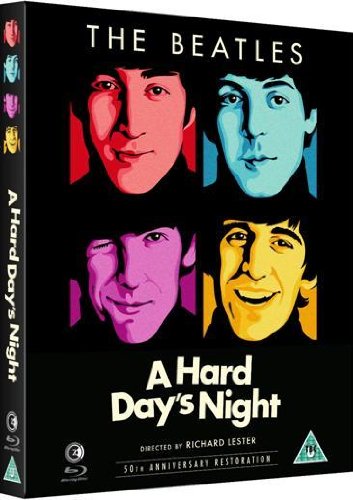 We announced back in March about the Criterion Collection’s superb new blu-ray edition of The Beatles’ 1964 film A Hard Day’s Night. This forthcoming release boasted a brand new 4k restoration, approved by director Richard Lester, as well as newly created 5.1 surround and stereo mixes supervised by Giles Martin at Abbey Road Studios.

The only issue with the Criterion set is that it is region-locked to region ‘A’ – the Americas and East Asia. Those in Europe would not be able to play on standard blu-ray equipment.

Thankfully, there is now a separate UK edition from Second Sight which is region ‘B’ coded (Europe, Africa, Middle East, New Zealand and Australia). This version mirrors all the key features in the Criterion Edition (although it appears as if a Richard Lester short has gone AWOL) and is easily identifiable by the use of a completely different cover. The Criterion cover is actually much classier, but them’s the breaks.

This new region B coded blu-ray edition of  A Hard Day’s Night is released a few weeks later than its American counterpart, on 21 July 2014. It will also be available on DVD.