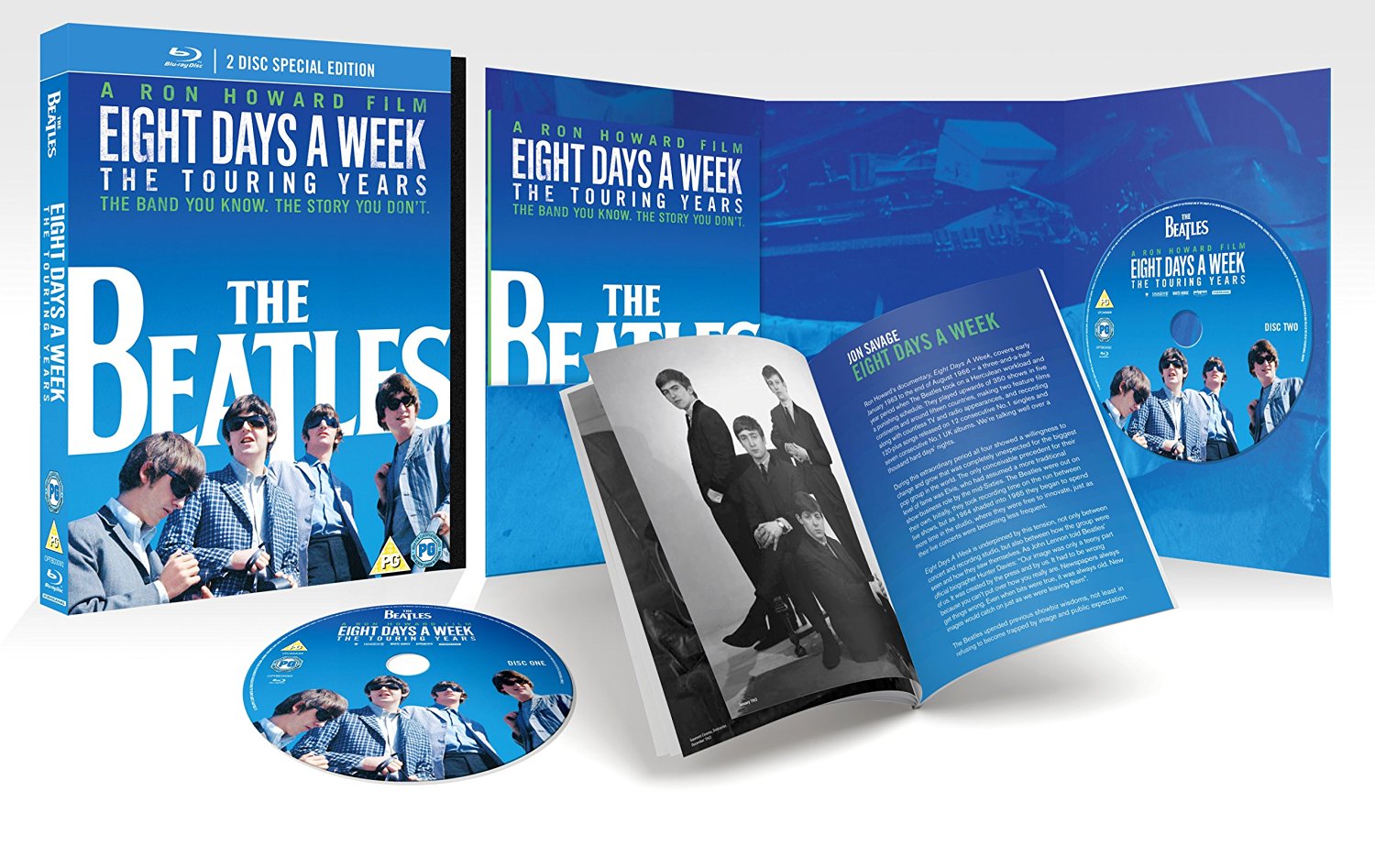 Two disc deluxe editions for both DVD and Blu-ray

Ron Howard’s Beatles documentary Eight Days A Week – The Touring Years is now available to pre-order on blu-ray and DVD.

Both formats come as two-disc deluxe editions with 100 minutes of extras including “exclusively created featurettes” and fully restored full length performances of some tracks, including Twist and Shout and She Loves You recorded at the ABC Theatre, Manchester in 1963 and Can’t Buy Me Love at the NME Awards, 1964, in London.

Notable by its absence however, is the Shea Stadium concert which is being shown theatrically with the film, although there is a feature called ‘Recollections of Shea Stadium’. See full bonus content below.

Apple/Universal have also chosen not to create a box set edition which combines the already issued CD with the video content.

These ‘home entertainment’ blu-ray / DVD editions will be issued on 21 November 2016.

Words & Music (24 mins)
John, Paul, George & Ringo reflect on songwriting and the influence of music from their parents’ generation, Lennon/McCartney writing for other artists, The Beatles as individual musicians, and the band as innovators.  Also featuring Howard Goodall, Peter Asher, Simon Schama and Elvis Costello.  The interviews with Paul and Ringo are unseen.

Early Clues To A New Direction (18 mins)
A special feature touching on The Beatles as a collective, the importance of humour, the impact of women on their early lives and songwriting, and the band as a musical movement. Featuring John, Paul, George & Ringo, along with Paul Greengrass, Stephen Stark, Peter Asher, Malcolm Gladwell, Sigourney Weaver, Whoopi Goldberg, Richard Curtis, Elvis Costello and Simon Schama.  Again the interviews with Paul and Ringo are unseen.

Liverpool (11 mins)
The early days in Liverpool of the late 1950’s and early 1960’s are brought vividly to life by those who worked closely with them at that time including fan club secretary Freda Kelly, Allan Williams an early manager, and Leslie Woodhead multi-award winning documentary film director.

The Beatles in Concert (12 mins)
Five great but rarely seen full length performances of The Beatles live in concert – Twist and Shout, She Loves You, Can’t Buy Me Love, You Can’t Do That and Help!