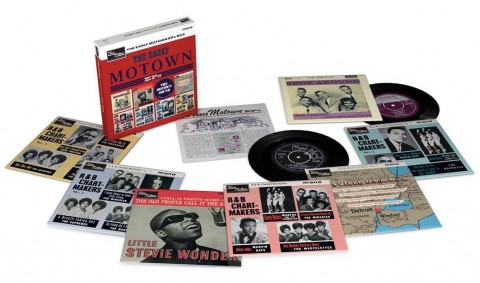 Out this week from Universal Music, The Early Motown EPs is a limited edition ‘various artists’ vinyl box set with Motown’s first seven EPs together for the first time…

Beginning an EP reissue series of rare Motown recordings from the three labels that formulated the Motown Sound – London American, $tateside and Tamla Motown – this vinyl compilation of 28 recordings showcases the burgeoning talents of Stevie Wonder, Marvin Gaye, Brenda Holloway, Martha Reeves & The Vandellas, The Supremes, The Miracles and more.

In the Sixties, record labels realised four-track EPs could be a useful marketing tool to boost the profile of emerging artists and whet appetites for their current or forthcoming albums. Motown EPs released in Britain came with glossy photo front covers (usually, but not always, with pictures of the artists) and sometimes carried mini-essays on the back of the sleeve giving extra information on the featured artists from across the pond.

Of the seven EPs reissued in this set, five are/were mini-compilations of an eclectic range of Motown artists (these were branded as either ‘R&B Chart Makers’ or ‘Hitsville USA’). The other two EPs focus individually on early tracks by The Miracles and pre- teen prodigy Stevie Wonder respectively.

Each of The Early Motown EPs box sets is individually numbered and includes a download card. The sleeves of each EP inside are almost identical to the original designs, but the sharp-eyed among you will notice that the $tateside logo has been replaced by Tamla Motown branding. Commenting on the SoulfulDetroit.com forum, Paul Nixon, the compilation producer of this and many other Motown reissues for Universal Music, explained why.

‘It wasn’t until way down the process that it became obvious that the $tateside logo could not be used as it now belongs to Warners,’ he wrote. ‘The London logo I believe is still with the Universal family. Future [Universal Music] sets will not be affected as they were carried on the Tamla Motown label. Otherwise these sets will be lovely. They are half-laminated like the original EPs and are as close to the originals as possible.’

Motown: The Complete No. 1’s is being reissued as an 11CD box set in June.…

Motortown Revue In Paris: Complete concert on 3LP or 2CD