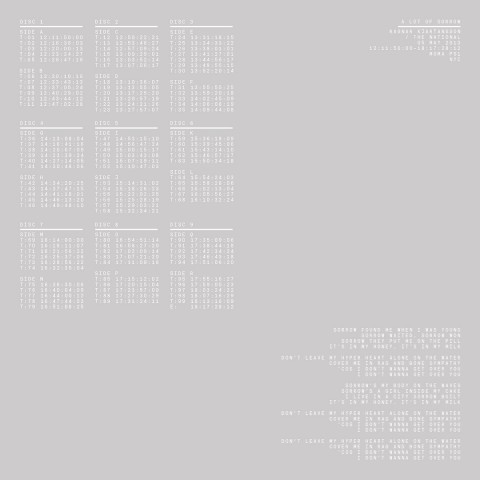 Brooklyn’s The National collaborated with Icelandic artist Ragnar Kjartansson back in 2013 on A Lot of Sorrow, a so called ‘durational performance’ where the band played their song Sorrow (from The High Violet album) live on stage (in NY’s MoMA PS1), repeatedly and continuously for six hours.

A limited edition run 9LP vinyl box set of this performance was available last month from 4AD (not any more) but can now be ordered from Amazon across the globe.

The set features nine pieces of clear vinyl in clear sleeves, held in a translucent, screen printed box. If six hours of the same song sounds bonkers, at least all profits are being donated to Partners in Health, an organisation dedicated to improving the health of impoverished people worldwide.

These will be shipped in late August or September, depending on where you order from. Only 1500 have been made. Buying guide: For once, the UK is the cheapest at £110 at the time of writing (they were £120 on the 4AD site).

The Smashing Pumpkins’ singles box from 1996, The Aeroplane Flies High, is to be reissued as a…

Can / The Lost Tapes vinyl box

Having been released on CD in the summer, Mute and Spoon are have announced…