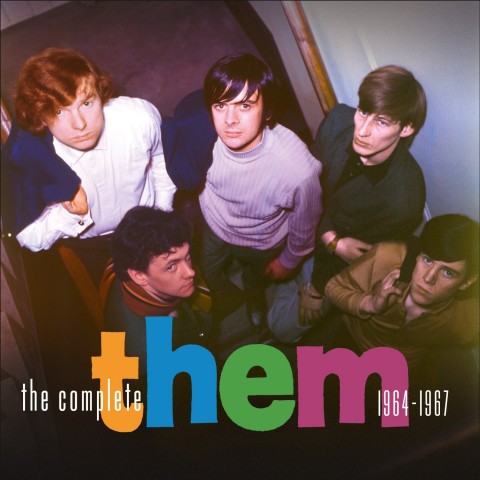 Enjoy all of Them with this three-disc anthology, The Complete Them 1964-67, billed as the most thorough collection of Van Morrison’s early studio and live performances ever assembled.

This is the first release via an exclusive licensing deal struck between Sony Music Entertainment’s catalogue division Legacy Recordings and Morrison’s own Exile Productions earlier this year. The set consists of all the tracks recorded for The Angry Young Them (1965) and Them Again (1966) albums, plus singles, demos, live sessions, rarities and alternate takes from the period 1964-1967, many of which are previously unreleased. As you would expect, all 56 tracks across the three CDs have been remastered and the discs come with a 16-page booklet featuring new commentary on Them by Van Morrison.

Taking their name from a 1954 science-fiction horror film, Them formed in Belfast in the early Sixties. Their original five-man line-up consisted of Morrison (lead vocals, saxophone, harmonica), Alan Henderson (bass guitar), Ronnie Millings (drums), Billy Harrison (guitar, vocals) and Eric Wrixon (keyboards). Within weeks of their first live performance in 1964 at Belfast’s Maritime Hotel, they were the hottest band in Northern Ireland’s capital, with crowds drawn by Van Morrison’s charisma and the band’s spontaneous interpretations of R&B, blues and soul music.

Decca Records signed, er, Them up and brought them to their studio in West Hampstead, London, for their first recording session during which they recorded their debut single – Don’t Start Crying Now (which was coupled with One Two Brown Eyes), Van classic Gloria (which was later inducted into the Grammy Hall of Fame in 1999) and their take on Bo Diddley’s You Can’t Judge a Book by It’s Cover and more.

It soon became apparent that Them was really Him – Van Morrison – plus a backing band. Consequently various session musicians were brought in as and when required to augment the line-up during the band’s short-lived career before Van officially went solo.

Their two albums were released in quick succession in the UK and US – The Angry Young Them in June/July 1965 respectively, with Them Again following in January/April 1966. The April release of the second album Stateside preceded a US tour where they enjoyed an historic residency at the Whisky A Go Go in Los Angeles (The Doors were their opening act) and headlined at the Fillmore in San Francisco before Morrison left the group later that year.

This retrospective on his early work caps a momentous year for Van Morrison, who turned 70 in August. Previously, in June he was awarded an honorary knighthood for ‘services to the music industry and to tourism in Northern Ireland’ and the Johnny Mercer Award at the Songwriters Hall of Fame Gala in New York City.