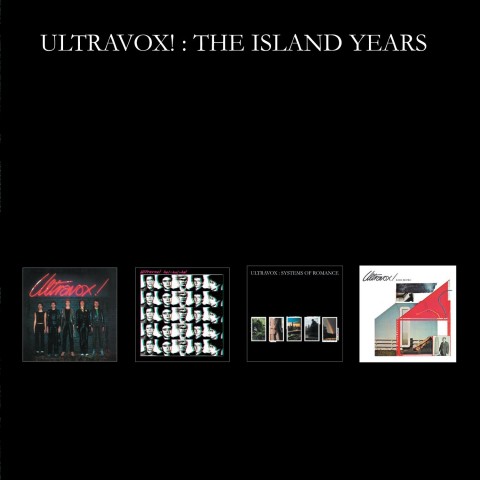 Not so much, ‘Oh, Vienna’ as pre-Vienna… in May, Caroline International release a deluxe four-CD box set with newly remastered versions of Ultravox’s first three albums (and a bonus disc of rarities) originally recorded for Island Records in 1977 and 1978.

The Island Years 2016-style represents a significant advance on previous collections, like the band’s 1999 The Island Years compilation which featured just 16 songs harvested from their first three albums. Here, Ultravox!, ha!-ha!-ha! and Systems of Romance are reproduced in full.

The set kicks off with the band’s eponymous debut album from 1977. The original Ultravox! (they spelt their name with an exclamation mark in homage to krautrock band Neu! back then…) line-up was fronted by singer John Foxx and the album – which included the single Dangerous Rhythm – was produced by Brian Eno and Steve Lillywhite.

Ultravox! reached the giddy heights of 25 in the Swedish charts, but failed to make much impact elsewhere, sadly. Undeterred, Foxx and co. released a second long-player before the year was out. Here, their early infatuation with the exclamation mark reached its nadir with the ludicrously punctuation-heavy Ha!-Ha!-Ha!. This album was a solo Lillywhite production, and yielded a lead single with an equally grammatically troublesome title, ROckWrok.

Sales of both album and single were disappointing. However, ROckWrok did garner some airplay on Radio 1 despite dropping the F-bomb in the chorus (‘Come on, let’s tangle in the dark/Fuck like a dog, bite like a shark’) – no mean achievement.

Arguably, the most significant track on the album though, was probably the last, Hiroshima Mon Amour, one of the first songs by a British band to feature a drum machine. Less punky than the rest of the songs on the album, Hiroshima signposted the band’s shift into synthpop.

A new year saw the culling of guitarist Stevie Shears, replaced by Robert Simon who soon changed his stage name to Robin Simon. It was all change on the band-name front too as ‘Ultravox!’ was distilled to pure ‘Ultravox’ and, mercifully, the cover of album three, Systems of Romance, was an exclamation-free zone. Synthesisers came to the fore as the band teamed up with legendary German producer Conny Plank, who counted Kraftwerk and the aforementioned Neu! among his credits.

Recorded at Plank’s studio in rural Germany, Systems of Romance, and the singles from the album Slow Motion and Quiet Men, didn’t trouble the charts. With little money in the coffers, tensions rose within the band, especially between Foxx and keyboardist Billy Currie, and the demise of the Ultravox appeared to be imminent. That was until Currie invited Midge Ure to join.

The band’s subsequent success has tended to overshadow the quality and diversity of these three experimental pre-Vienna albums that are well worth revisiting or exploring for the first time. And this deluxe set is bolstered by a bonus disc, Rare Retro, featuring 20 songs, including four recorded in session for John Peel’s BBC Radio 1 show and two previously unreleased live recordings from the Beeb’s The Old Grey Whistle Test programme, plus a 20-page booklet featuring a new essay by writer and music journalist David Buckley. Each of the CDs are packaged in their own wallet and housed in a clamshell box. 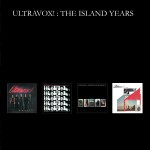