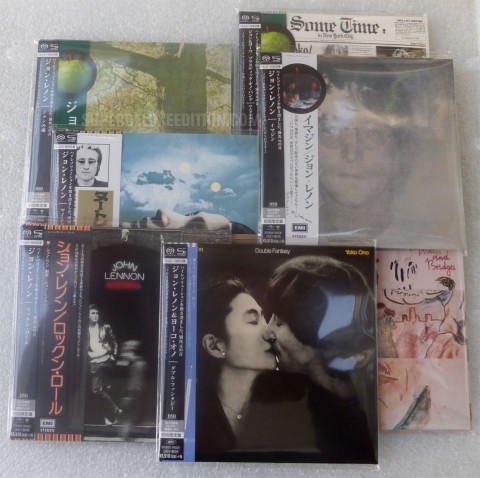 All of John Lennon‘s solo studio albums were released in Japan just before Christmas on the hi-res SHM-SACD format (as well as ‘red book’ compatible SHM-CD and ‘platinum’ SHM-CD editions).

SDE brings you an extensive photo gallery of all the SACDs in their mini-LP CD / ‘paper sleeve’ glory. The first thing to point out is that these do not come in an outer games console type box like The Police‘s Zenyatta Mondatta release we looked at here. This means that in terms of packaging, all three editions of these new Lennon are effectively the same. But oh, what packaging!

All the CDs come with two OBI strips. One which wraps all the way around the back of the paper sleeve and the other which replicates the original Japanese LP OBI. All these issues (except Rock ‘N’ Roll) come with the original inner sleeves replicated and you get some of the ‘extras’ too. Imagine includes the Macca-baiting postcard of John holding a pig (RAM-style) and includes the original poster. Some Time in New York City also comes with a tiny postcard (this time of the Statue of Liberty) and despite the audio being on one disc here, both inner sleeves are included. Finally, Walls and Bridges features the card strips on the front that fold back to reveal 11-year old John’s drawing of ‘football’ (you can fold the strips all the way back to change John’s face of the reverse).

This feature isn’t really concerned with how these sound, although I did compare the Imagine SACD with the blu-ray audio and discovered that there is very little difference at all. If you held a gun to my head and made me choose, I’d opt for the SHM-SACD.

Scroll down for the photo galleries. Simply click on an image to enlarge and then either click again to close or use the arrows to work through the other images for that particular album.

Some Time in New York City