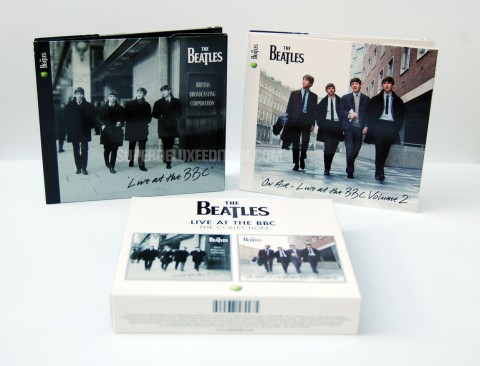 Apple and Universal have done a very good with these new Beatles BBC releases. The Collection ‘box set’ is in reality is just both volumes contained in a simple card slipcase, but these releases do feel like two peas in a pod, so why not give them a ‘pod’ to reside in?

1994’s Live at the BBC is newly remastered and gets a presentational lick of paint, losing the sepia tones that defined the original and the plastic ‘fatbox’ 2CD jewel case. The packaging is now consistent with the 2009 stereo CD remasters, so that means glossy six panel card wallets, with the black strip and Apple and Beatles logos at the top. The 48-page booklet contains exactly the same content as before, but the layout is slightly different and the photos look much better, with the black and white shots again losing their sepia.

The new two-CD collection is On Air – Live at the BBC Volume 2. The stunning cover shot of ‘the boys’ walking along a London street has been colourised – like one of those old Laurel And Hardy films – which in theory should be a little naff, but it adds something quite special. There is an air of unreality about it, which is somehow appropriate, given how unreal The Beatles achievements were in terms of record sales and social impact in these early years.  As you will see from the photos below, the packaging is cute because it echoes the design of the new Live at the BBC reissue. So the four Beatle mug shots, which are black and white on volume one, are again colourised on volume two. Same goes for the widescreen shot of the BBC Radio Studios in Central London. Volume one has white type on black, while volume two reverses it. The booklet is the same size and length as for the first release and author Kevin Howlett provides continuity by again contributing some excellent notes at the beginning.

The slipcase is definitely a ‘nice to have’ rather than something essential. But considering we went to considerably more expense to get hold of this Italy-only Beatles remasters box, it wasn’t going to be an option to not get these releases without the box. It’s only a few pounds extra, after all.

The Beatles / Live at the BBC: The Collection is out now.