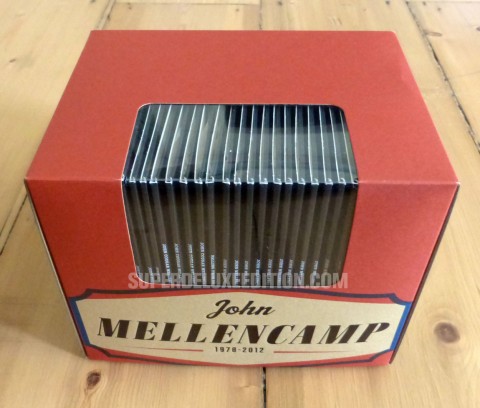 This John Mellencamp 1978-2012 career overview was originally released back in December 2013 but seemed to be around only briefly before becoming unavailable. Six months later is seems to be back in stock at various Amazon sites and my copy turned up a few days ago (having been ordered in January 2014!).

I don’t know whether the long wait had raised expectations with regards to this set but upon opening it, it was quickly clear to me that this is one of the worst packaging jobs on a music box I’ve ever seen.

The 19 CDs come in the kind of card box that you might find a Yuletide Christmas Log in – complete with little plastic ‘window’ so you can see what’s inside. I’m talking about a chocolate log that you’d be lucky to pay £5 for. This set is around £100.

Once you slide the very flimsy card ‘lid’ off the box set you can access the 19 discs. Each album cover art is about 20% smaller than you’d expect thanks to a thick black border around the outside of each card wallet. The discs all have a consistent design, but that is about it – a disc in a basic card wallet. No gatefolds, no inner sleeves, no special packaging elements (foil blocking, embossing etc).

So what else do you get in this box? Er, nothing. That’s it. No book (or even booklet), no essay, no array of archive photography, no hi-res, no surround sound, no download code for MP3s, no DVDs, no lithograph, no poster, no marbles, no scarves, no tote bag, no badges or key-rings – nothing at all. Yes, it seems that Mercury Records apparently really do think that 19 John Mellencamp CDs in plain card wallets is worth 100 of your English pounds. Or to put it another way roughly the same price as the Bob Dylan 47CD set which comes in a sturdy (and beautiful) outer box and comes with a 272 page hardback book! Or about the same as it cost to buy The Clash Sound System box with its hidden compartments and fantastic selection of music and memorabilia.

For heaven’s sake, at the time of ordering, the Wings Over America box set was £10 cheaper than this and that must have cost a billion times more to make than this box with its air of disposability.

I’m deliberately avoiding talking about the music. Perhaps some of the remastering is spectacular, but putting that to one side, this is a truly pathetic attempt to present an artist’s career to the paying public. If this is the best you can do, why bother? The only way to even find out something basic like which year each album came out, is to look at the small print at the bottom of the rear of each wallet. You have no idea who played on each album, whether the album was successful, or what was going on in John Mellencamp’s life at that time. Not really far short of giving someone a load of MP3s on a USB stick. Amazing.

If this was £35, the criticisms would still apply but they’d be easier to forgive. But it’s three times that price. If you’re charging for Afternoon Tea at The Ritz, then you need to deliver paper doilies, silver service, Cornish clotted cream and bone china. What we have here is a cellophane-sealed tuna sandwich with yesterday’s date on it. Avoid.