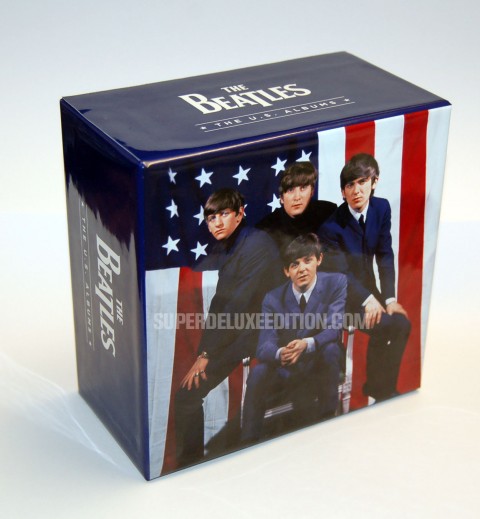 We thought we’d start the new year with something very special. Just before Christmas, Apple Corps/Universal Music invited SuperDeluxeEdition in to take an exclusive look at the forthcoming Beatles box set, The U.S. Albums.

As previously announced on this blog, this special collection is released on 20 January 2014 and contains 13 CDs; titles released by Capitol Records in the 1960s that, for the most part, were quite different from their UK counterparts (new titles, alternate track listing, occasional mix differences).

The U.S. Albums box (the individual titles are also being released separately) celebrates 50 years since The Beatles’ started the so-called ‘British Invasion’, when I Want To Hold Your Hand hit number one in America. Half a century hasn’t diminished the scale of that achievement. I Want To Hold Your Hand spent seven weeks and the top of the US charts and went on to sell an incredible five million copies. It only relinquished the top-spot to She Loves You (which had by that point already spent five weeks waiting patiently at number two!) and during this time The Beatles made their historic appearance on The Ed Sullivan Show. Beatlemania was in full swing and in April 1964 the band held the top five positions in Billboard’s Hot 100.

The U.S. Albums box set is very similar in style to The Beatles in Mono box that was issued in 2009. It eschews the stark black and white of previous box designs and boasts a glossy and colourful presentation set largely in blue, with a great photo of John, Paul, George and Ringo positioned in front of the Stars & Stripes (the image is used on both sides of the set). Like the Mono Box an inner ‘drawer’ (complete with Apple Corps logo) slides out containing the 13 CDs in Japanese-style clear resealable plastic sleeves. The box is a high quality affair and is very sturdy.

The individual albums are reproduced in vinyl replica mini-LP CD style, on VERY thick card. These include two gatefolds (The Beatles’ Story and Help!) and Yesterday And Today is reproduced with the infamous ‘butcher’ cover. This comes with a separate sticker which features the replacement ‘trunk’ cover. Replica inner sleeves with period adverts are accurate (“Join the teen set on Capitol“, “Capitol ’66; Sounds Great!“) and the CDs within these paper inner sleeves have a further protection from thin Japanese-style plastic inner wallets.

Starting tomorrow with Meet The Beatles!, we will bring you further photos of the individual albums over the next two weeks.

In the meantime, we’d like to wish you all a very happy twenty fab four-teen and hope you enjoy the many photos of this box set, below. We will answer any questions we can on this set – just leave a comment.

DEAL ALERT:  At the time of writing this box can be picked up from Amazon France for £115; that’s over £40 cheaper than the UK price.