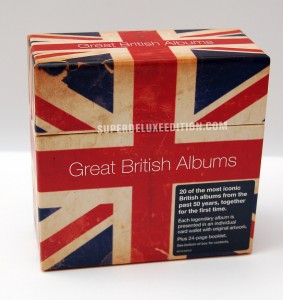 Here in the UK, this summer has been one of celebration, with The Queen’s Diamond Jubilee in June, followed swiftly by the London 2012 Olympics and Paralympics.

On the back of this wave of patriotism, Sony Music have taken the opportunity to release a box set containing “20 of the most iconic British albums from the past 50 years”.

The Great British Albums box set is pleasingly presented, with a slightly grungy Union Jack design on a sturdy lift-off lid box. The 20 albums within, come in individual card wallets with bespoke designed discs. It’s a fairly minimal approach, but at least this set provides a 24-page booklet with songwriting credits, track listings and performer details for the albums within.

Of course, it’s something of a mug’s game trying to come up with a definitive list of the great British albums, and Sony are naturally limited to music they have the rights to issue, via labels such as RCA, Epic and Columbia. But the selection of “genre defining” records is less predictable than you might expect, and the box does succeed in offering a wide range of different musical styles across the decades.

Fleetwood Mac kicks things off with some blues, via their second album Mr. Wonderful and the prog rock box is ticked by the inclusion of Emerson, Lake & Palmer‘s Tarkus from 1971. The Only Ones‘ eponymous debut and The Clash‘s London Calling move us through the late seventies in suitably punky fashion.

Eyebrows will be raised at Adam & The Ants‘ Kings Of The Wild Frontier rubbing shoulders with bona fide classics such as Prefab Sprout‘s Steve McQueen, but the inclusion of Screamadelica by Primal Scream and The Stone Roses’ first album is hard to argue with.

That said, it is seriously debatable whether Mark Ronson‘s Version will stand the test of time, and its inclusion feels a little zeitgest-friendly. Nevertheless, given the wide variety in the box (few people will own all the albums) there really is something for everyone and it is an effective whistle-stop tour of musical movements through the decades.

This box is effectively a tasting menu of British music. If you don’t like something (prog rock?) simply push it to the side of your plate and move on to something you might find more palatable (punk or new wave..?). At around £35 for the box, each album costs less than £2, so this set is excellent value.

Possibly a box set to fill the gaps in your record collection, or one for parents to buy the teenage kids to teach them about ‘proper music’!