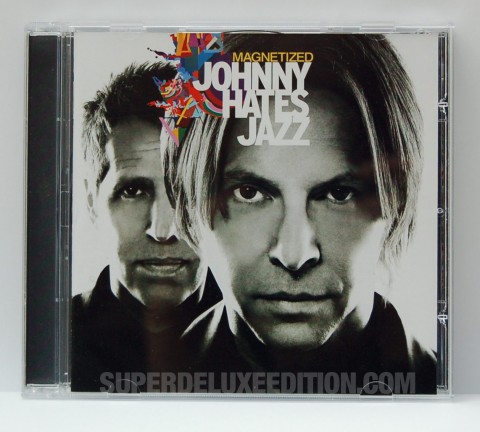 Johnny Hates Jazz are back!

It’s been over 25 years since Clark Datchler, Mike Nocito and Calvin Hayes released Turn Back The Clock, a rather underrated and forgotten slice of well-crafted pop. A decent career beckoned, particularly since unlike some of their contemporaries (Wet Wet Wet), the band had ‘cracked’ America, with lead single Shattered Dreams peaking at number two on the Billboard Hot 100 chart in 1988.

Disappointingly, things imploded after their debut, when lead singer and songwriter Datchler upped and left. The rest of the band gamely carried on for a further album with producer Phil Thornalley on vocals, but further success eluded them.

Datchler should have enjoyed a successful solo career, but after a stillborn debut album Raindance (barely released in the UK), he appeared to take life easy and spent time travelling and collaborating with other (non-mainstream) musicians. He would only record two other albums in 20 years (Fishing For Souls and Tomorrow) and became interested in Native American philosophy and environmental issues.

In 2009 Datchler rejoined the band, only for Hayes to leave in 2010, so JHJ are now a officially a duo, with Mike Nocito producing, engineering and programming and Datchler writing all the songs and contributing as a multi-instrumentalist.

What’s impressive about the new album Magnetized, is how little appears to have changed in 25 years. It really does pick up where the band left off in 1988. Clark Datchler is in fine voice and the melodies and hooks are all present and correct. It starts impressively with a slick slice of adult-pop in the shape of title track (and first single) Magnetized. In the ‘old days’, this would be probably be an enormous hit single. Unfortunately for JHJ, today’s pop landscape has changed significantly, but a recent ‘A’ listing for the single on BBC Radio 2 suggests that people know a good song when they hear it.

After the high of the title track, the album continues in fine fashion – Man With No Name and the stomping You Belong To You have the effortlessness and strong choruses of some of Take That‘s recent offerings, and piano-led The Road Not Taken and mid-paced Goodbye Sweet Yesterday echo the regret and longing of 1987 single Turn Back The Clock.

Not every track hits the heights, but like the Turn Back The Clock album all those years ago, there is little here that will not have you tapping the steering wheel, or singing along while playing it in your car. It’s a great driving album – the pulsing, chanting Lighthouse is another superb pacey track.

As singer, songwriter and keyboard player, this might at times seem like ‘the Clark Datchler show’, but special mention should go to Mike Nocito, who with his production skills has created a brilliant sounding record. Magnetized manages to sound modern and slick, without sounding too processed. The band have not reinvented their sound (plenty of ‘bass synth’!), but rather updated it, and there are some fine musicians on the record with real drums, percussionists and guitarists. In fact, Art Of Noise legend Anne Dudley plays some keyboards and does all the string arrangements.

Of course, it’s not fashionable to like a band such as Johnny Hates Jazz. We are aware of that. They weren’t that hip in 1987, never mind 2013, and they will not benefit from the feelgood factor that, say, Take That enjoyed when they reformed. But bollocks to all that. A great record is one you want to play a lot and Magnetized is just that. Unabashed pop music, made by grown-ups, for grown-ups. A real pleasure, and not a guilty one at that.

Magnetized is released on 6 May in the UK and during that month in other territories.

Visit PledgeMusic to secure exclusive rare editions of Magnetized (and signed items), or use the Amazon links below.