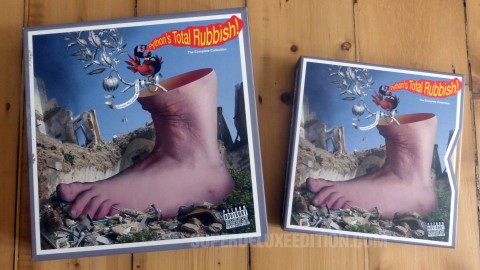 Universal Music’s recent Monty Python box sets are a superb celebration of the audio-only exploits of the influential comedy group.

Monty Python’s Total Rubbish is available as a nine-CD set or a nine-LP vinyl box. Both come with an excellent hardcover books with entertaining notes by Robert Ross, guiding you from album to album. The graphic design is authentically Python, thanks to the hands-on involvement of Terry Gilliam.

The nine CDs are packaged in two gatefold wallets, which along with the book, slot neatly into the sturdy outer slipcase. All the records are pressed onto 180g vinyl and the design fairly accurately reflects the original issues, with the distinctive Charisma labels, “FREE RECORD” on the Tie And Hankerchief labels and so on (the die-cut sleeve for Tie and Hankerchief isn’t recreated however).

Both boxes have their advantages and disadvantages. The CD set is compact, contains all the bonus material from the 2006 Virgin reissues and is about half the price of the vinyl box. On the other hand, these albums were recorded expecting the listener to be playing a vinyl record. Therefore there are plenty of comedic moments relating to the vinyl format itself that make far more sense (and are funnier) if you’re playing the LP. Examples of this include Michael Palin saying “Sorry Squire, I scratched the record…” at the end of side one of Another Monty Python Record which then repeats ad infinitum thanks to the run-out groove, or Terry Jones screaming “Not this record!” several times at the beginning of Monty Python’s Previous Record before the sound of a needle being scratched to end his ranting.

The the two concentric grooves on Matching Tie and Handkerchief – which back in the 1970s had customers complaining that side two was a con because it only lasted half the length of side one – is maintained here, but of course on the CD the effect is lost (the content on the grooves is simply repeated one after the other). It should also be noted that if you buy the vinyl box you do still get all the bonus material, but via a download card, rather than physical media.

Although the book breaks down the albums track-by-track – or should that be skit-by-skit – the design on the records accurately recreates the original where there was often not much information at all about what you would hear. If you aren’t familiar with the albums I’d recommend jumping into the unknown, without referencing all the details – it’s much more fun.

Both sets come with a heavyweight vinyl seven-inch which replicates the original Tiny Black Round Thing flexi-disc which was originally issued with the NME on 25 May 1974. A nice touch in a set full of nice touches.

The involvement of the Pythons enriches the whole offering. The book is highly entertaining, telling of the group complaining one minute about the penny-pinching BBC when they put together the first record (recorded only in mono, much to their annoyance) and then moaning that Charisma spent far too much on the second album (Another Monty Python Record) due to a kind of rock ‘n’ roll lackadaisical attitude (“We would record hours and hours of material and no one was making notes” says Terry Jones).

To be honest you don’t need to do anything much to make Monty Python more entertaining than they already are. However if you are going to do a box set, you may as well do it properly. Total Rubbish is beautifully presented and really enhances the original material – the detail and the enthusiasm that has been put into the task is very welcome. One wonders what future generations will make of a set like this when it gets passed down the line? My guess is that they will probably laugh. Hard to think of any other reaction. Highly Recommended. 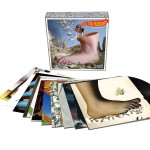 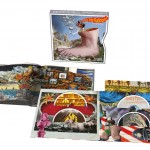 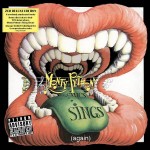